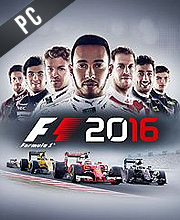 It's a digital key that allows you to download F1 2016 directly to PC from the official Platforms.

Allkeyshop.com compares the cheapest prices of F1 2016 on the digital downloads market to find the best sales and discount codes on trusted stores.

F1 2016 is a racing, simulation, sports video game that is based on the 2016 Formula One Season. The game has been developed by Codemasters Birmingham and published by Codemasters.

F1 2016 offers a great career mode. Instead of offering the usual five seasons, now it will have 10 full seasons. It will also include the twenty-one circuits of the 2016 Formula One season. All in all there will be twenty-two drivers and eleven teams, all competing for the championship.

The Virtual Safety Car will also be introduced in this game. It will have revised safety mechanics and will allow its players to have more control in the car’s performance.

EU STEAM CD KEY: Requires an EUROPEAN IP address or you must activate it with a VPN (Virtual Private Network) in order to play F1 2016. Might have languages restrictions or language packs. Read the description on the store game page to know if the EU IP is only needed for activation or for playing also (maybe on EU Servers). Most of the stores offer you their help, or show you how to do this with a tutorial to follow.
STEAM CD KEY : Use the Steam Key Code on Steam Platform to download and play F1 2016. You must login to your Steam Account or create one for free. Download the (Steam Client HERE). Then once you login, click Add a Game (located in the bottom Left corner) -> Activate a Product on Steam. There type in your CD Key and the game will be activated and added to your Steam account game library.
Bonus Edition
Limited Edition
Standard Edition
Compare Choose & Buy Download (689)

awesome game and and even better price on this page, 10/10 would buy again

Currently CDKeys.com is the best place to purchase this game