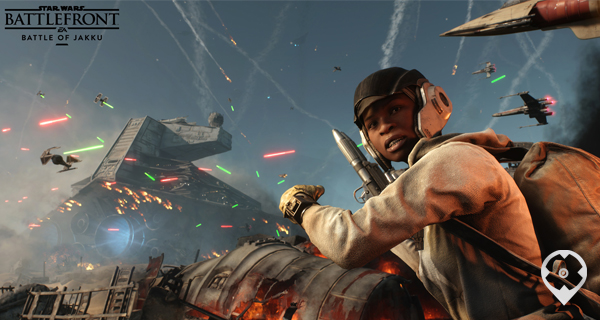 A few days before its launch on December 8th, Star Wars Battlefront Battle of Jakku gets a stunning video which highlights the DLC’s action-packed gameplay.

Star Wars Battlefront Battle of Jakku will add a new 40-player game mode called Turning Point. In this mode Rebel forces will go up against Imperials for control points and claim the planetary base. Rebels must siege one of three control points, which will then open up further points located deeper within Empire territory. This will continue until you unlock the ability to perform a final assault on the Empire base.

Battle of Jakku is set 29 years after Star Wars: The Force Awakens as a result of the Rebel victory in the Battle of Endor. The Battle of Endor is “the pivotal moment when the New Republic confronted key Imperial holdouts on a remote desert planet,” as explained by EA in a recent livestream of the DLC’s gameplay on Twitch.

So what can you say about the Battle of Jakku’s gameplay? Let us know in the comments below!