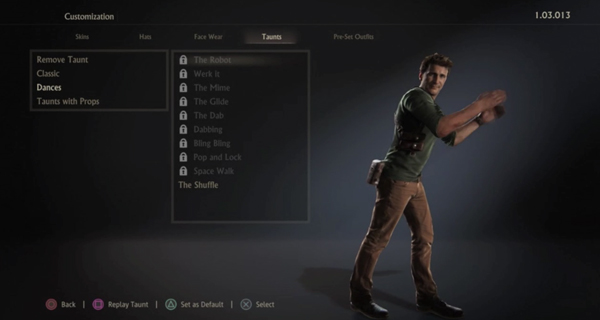 Who knew these Uncharted 4 characters can groove to the latest dance moves?

A Tumblr user named Kimbree created a compilation of Uncharted 4 characters’ dance moves and merged them into one hilarious music video. Dancing to the tune of “Cake by the Ocean” by DNCE, the video shows Nate, Sam, Elena and Sully getting their groove on and showing the latest dance moves such as “The Bling” from Drake’s “Hotline Bling”, the “Robot”, “Mime”, “Space Walk”, “Shuffle”, and more.

Wondering where you could find these characters doing these dance moves? Well, Uncharted 4’s multiplayer allows you to customize your avatar with a dance move, just because they can. While the game itself does not show the characters dancing while in-game, what you’ll experience is a lot of shooting, jumping, running, dodging, and all the other awesome Uncharted stuff the game is known for.

The video has since received more than 30,000 notes on Tumblr.

For now, let’s thank Kimbree for the awesome video she created. Definitely made our day!

Uncharted 4 was officially released on May 10, 2016 and is an exclusive to the Playstation 4.

You can also make someone else’s day by sharing this post to your friends, or let us know your thoughts in the comments below!