October Game Fest! – 5 of the Best Games to Look Forward To 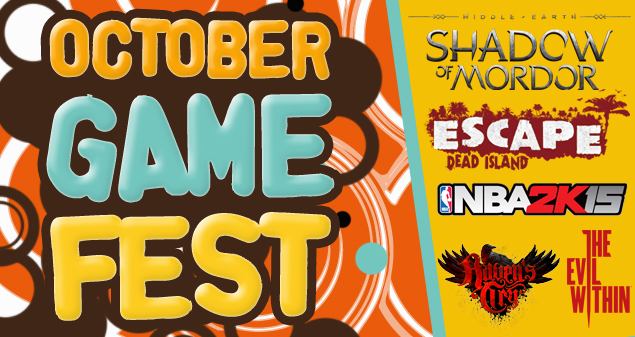 October is here! It’s a new month, and of course, new games are coming our way! It’s like a celebration of our own, ‘coz we’re telling you, October is packed with 5 of the hottest games we all should look forward to. 🙂

So here is a quick list for you guys out there. Did your favorite game make the cut? Which ones are you looking forward to playing soon? 🙂 Check ’em out!

There’s nothing more dangerous than someone who’s got something against you – Middle-Earth: Shadow of Mordor is the perfect example of how vengeance eats up a person’s character. Take on the role of Talion in Middle-Earth: Shadow of Mordor, an open-world action RPG set in the universe of The Lord of the Rings. Uncover the truth of the spirit that compels you through Talion’s personal vendetta, learn the origins of the Rings of Power and confront your true nemesis – do everything you can to help the resurrected Talion destroy those who have wronged him.

Escape is just the beginning. Unravel the origins of the zombie outbreak with Cliff Calo through the story-driven survival-mystery adventure Escape Dead Island offers. Find and use tools for your survival and fight off and kill zombies using a wide selection of weapons. Discover the secrets of Dead Island, and find the missing link between the previous Dead Island games and the upcoming Dead Island 2. Escape Dead Island is not just your typical zombie apocalypse game.

With 70 Game of the Year Award Nominations on its heels, the NBA 2K franchise brings fans yet another fantastic gaming experience through NBA 2K15, also featuring Kevin Durant of the Oklahoma City Thunders on its cover. The 16th installment in the franchise promises players new and improved life-like graphics and a more realistic gameplay.

Raven’s Cry brings players to the world of Carribean Pirates through the eyes of Christopher Raven, a man devoured by vengeance against those who murdered his family. Immerse in a more detailed and realistic open world featuring a powerful storyline and side quests and explorations. Test your decision-making skills and watch how the rest of the game unfolds. Experience these and more only in Raven’s Cry.

From the creator of the world-renowned Resident Evil series comes yet another survival horror game. The Evil Within is packed with highly-crafted horror-inducing environments, action-packed gameplay, and an intricate storyline. Fight for survival using limited resources and experience fear like never before.

Saw the Evil within trailer and it was amazing 😀 hope it’s as good as outlast.LOVE horror games!

Middle-Earth: Shadow of Mordor is the best game from 5 of the hottest games that come in October

Shadow of Mordor is soooooo good. To me is a strong contender for Game of the Year. The Evil Within looks interesting.