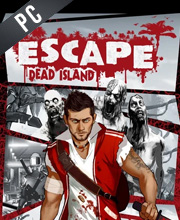 It's a digital key that allows you to download Escape Dead Island directly to PC from the official Platforms.

How can I find the best prices for Escape Dead Island CD keys?

Allkeyshop.com compares the cheapest prices of Escape Dead Island on the digital downloads market to find the best sales and discount codes on trusted stores.

Escape Deal Island is a survival-mystery game set after the events during the original Dead Island.

This game will bring you to a journey through the Island of Narapela. Located within the Banoi Archipelago, the island boasts of lush greens and exotic wildlife… that is… until the apocalyptic zombie outbreak happened.

You will follow the journey of Cliff Calo, son of a wealthy media mogul who leads a carefree life and decides to set sail to the island of Banoi in order to secure his right as heir to the family business by trying to uncover the unexplained events within the island.

Help Cliff face his undead adversaries only armed with make-shift weapons found all throughout the island. Put your survival skills to the test, and escape the island alive!

EU STEAM CD KEY: Requires an EUROPEAN IP address or you must activate it with a VPN (Virtual Private Network) in order to play Escape Dead Island. Might have languages restrictions or language packs. Read the description on the store game page to know if the EU IP is only needed for activation or for playing also (maybe on EU Servers). Most of the stores offer you their help, or show you how to do this with a tutorial to follow.
STEAM GIFT : A Steam gift is a one-time transfer you receive. You activate and install Escape Dead Island to play on Steam, it is a non-refundable game that stays in your Steam games collection. Please read the store description about any language or region restrictions.
STEAM CD KEY : Use the Steam Key Code on Steam Platform to download and play Escape Dead Island. You must login to your Steam Account or create one for free. Download the (Steam Client HERE). Then once you login, click Add a Game (located in the bottom Left corner) -> Activate a Product on Steam. There type in your CD Key and the game will be activated and added to your Steam account game library.
Bonus Edition
Standard Edition
Compare Choose & Buy Download (689)

One of the legends… But honestly I never liked any of zombe. Just probably I grew up with other kind of games and I experienced bad zombe… Well but it’s good to see it here ^-^

i have already played this game..its graphics is quite good nd the story is very good