Milestone kicks off the new season in April with MotoGP 21 on PC and all console platforms, including PS5 and Xbox Series X|S. Check out the first gameplay video featuring the innovations and improvements you’ll expect.


As the release of the popular motorbike racing series draws near, Milestone and Dorna Sports have revealed MotoGP 21’s first gameplay video. It features the “Long Lap Penalty”, which is a penalty for drivers who engage in unfair behavior during the course of the race, such as taking shortcuts or basic disregard for racing rules.

The penalty consists of adding a few seconds of extra driving time to a lap. This is made possible by an additional sub-section that adds extra meters to the regular race track, making the total lap time a few seconds longer than expected.

This procedure is a useful way for the stewards to impose a minor penalty, but could cost the driver his current position.

More realistic than ever

MotoGP 21 promises an even more realistic racing experience than ever with new features and improvements such as the Manager Mode. Expect an electrifying, strategic and adrenaline-fueled racing simulation like you’ve never seen before.

Respawn was yesterday: After a crash, the bike is not automatically teleported back onto the track. From now on, the rider has to get up himself, sprint to the bike as quickly as possible, and get back on. Players should be careful how they take the corners!

Brake temperature: When riding, it’s not all about pure speed, but also about the right strategy. To keep the situation under control at all times, it is necessary to take a close look at the temperature of the brakes. If they are too hot or too cold, this affects their effectiveness. 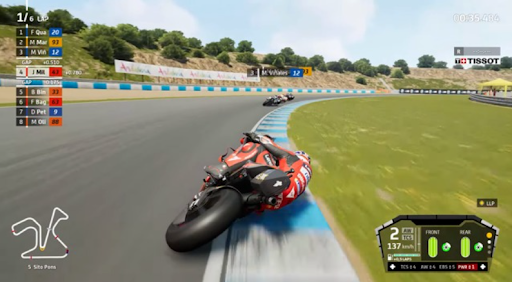 Long lap penalty: The addition of the Long Lap Penalty brings the experience closer to the real-world championship.

Revised motorbike suspension: The level of realism has been increased once again. This feature will please all simulation lovers.

2021 is the year of the new console generation, and MotoGP 21 is also ready to introduce many technical innovations. Players enjoying the title on the PlayStation 5 and Xbox Series X will benefit from dynamic resolution up to 4K and 60FPS. The overall image quality has been improved and, together with the new lighting, creates a unique world that transfers the sensations of the real races to the digital stage. Loading times are reduced, and for those who can’t live without the action of competition, online races are now possible with up to 22 drivers.

MotoGP 21 will get improvements and will be expanded with new game content and updates over the months after its release.

MotoGP 21 launches 22 April 2021. Get the best price on your MotoGP 21 CD key by comparing prices only here at Allkeyshop.