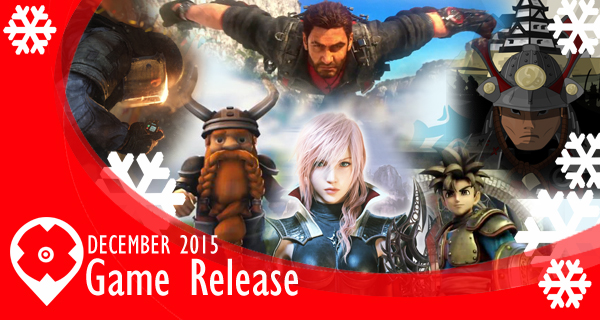 We bring you this month’s games plus exciting trailers to give you a glimpse on what’s in store for you!

General Di Ravello, a powerful dictator, has placed the Mediterranean Republic Medici under brutal rule. Medici can only be saved by Rico Rodriguez, a man with a mission to destroy General Di Ravello, and his power, stopped. You have all 1000 kms from the sky to the ocean floor available, including a huge arsenal of weapons, equipment and vehicles to arrest the general. You should prepare yourself, be as creative and explosive as possible to cause a huge mess. Stop this dictator – whatever the cost!

In Tom Clancy’s Rainbow Six Siege, you become the true master of the art of destruction. Enthralling dogfighting, high lethality, a lot of tactics, unique teamplay and explosive action here are quite high in the center of the gaming experience. The gameplay is based on its successful predecessor, Tom Clancy’s Rainbow Six series, and sets new standards for huge firefights and your skill for successful strategies.

Tenshu General is a cross between a classic board game and a real-time strategy game. Set in medieval Japan, you take the role of a Tenshu and defend your castle against intruders and expand your own territory. Can you beat your enemies? Figure it out.

Carry out numerous tasks in the open-world city economic simulation, CITYCONOMY. Own a service company and take care of your metropolis. Coordinate and control all of the classic garbage disposal from sewer cleaning to towing up the lane. A total of 15 vehicles are waiting for you, in single and in multiplayer!

Explore your freely passable city with its various districts, the historic center, the Industrial Park and many residential areas. New tasks are everywhere and go on missions on your ever-growing fleet. Are the citizens satisfied with you? Additional skills, jobs and machines are unlocked as you go. Be ready!

Vikings live their life according to the will of the gods, fighting bravely, courageous and die an honorable death, and now this! The poor Vikings are at the gates of Asgard to get admission to Valhalla, but in vain. The Gods pack is ungrateful and suggests them a cranky goal in their face. But true Vikings do not give up. They go on a journey to Valhalla.

But the otherwise the mighty Vikings are no match for the dangers and challenges of mountain landscapes, because their kingdom is the sea. Keep them on their way, collect food, suggest wood and take care of the welfare of your little people. Achieve them with the portal on the top of the mountain, only the Vikings get a piece of their goal, Valhalla, closer.

Dragon Quest Heroes: The World Tree’s Woe and the Blight Below shows you an incessant swarm of cute, pacifist deforested opponents and one wonders who the real villain in this adventure is. Of course, none, what matters is to enjoy the spectacle.

The world of Gran Pulse will sink into the sea and Nova Chrysalia’s all that’s left. There remain only 13 days until the end of the world, and there’s total chaos in this world that never ages. New life cannot be born. People desperately need salvation. It’s your job to save as many souls as possible so that they can be brought into the new world. Along your journey, you’ll encounter familiar faces and new enemies. It is ultimately your own decision as to which souls you save and which will leave you. Only in this way will fully understand Lightning’s true destiny. It all ends here!

The Sims 4 Get Together

The Sims 4 Get Together lets you in Wind Castle, an immersive European-inspired world with vibrant, modern architecture and classic buildings, a charming landscape, a much visited town square and the luxurious Island Wind Castle is filled with new and exciting things for your Sims and with numerous activities. But you will not be alone to explore these new attractions. As the name suggests, all Sims who want to have fun with their friends meet, whether to make them play in their own exclusive club or in Wind Castle. You can join different clubs, each with their own interests, personalities and styles. There are behaviors that dictate how to act, including how to deal with the other Sims, and what they do or do not want to do. There will be a variety of clubs, waiting for your Sims. With the Expansion Pack, you will be able to pimp your own life. You can specify requirements and decide what behaviors will have you select your preferred hangouts and you get different rewards.

Rollercoaster Tycoon World  includes innovations, including an intuitive 3D track creator, deformable terrain, physically correct park creations, and a lot more. Players can also form teams with friends from around the world to form a theme park and to survive with other world competitors. Enjoy the ride of your life, take care of the incredible roller coasters to entertain your park guests, and create your very own concept. Make your park and be the world’s best Roller Coaster Tycoon.