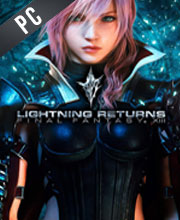 It's a digital key that allows you to download Lightning Returns Final Fantasy 13 directly to PC from the official Platforms.

How can I find the best prices for Lightning Returns Final Fantasy 13 CD keys?

Allkeyshop.com compares the cheapest prices of Lightning Returns Final Fantasy 13 on the digital downloads market to find the best sales and discount codes on trusted stores.

In Lightning Returns: Final Fantasy XIII, you play Lightning, the legendary heroine of the trilogy, after a long slumber 500 years. You wake up in a world about to fall into the Apocalypse. Immerse yourself in this final installment where God (Bhunivelze) asks you to save as many souls as possible.

Help them to join in the new world he created. To do so, complete the quests requested by the souls but be careful, you have only thirteen days for that, if you fail, the Mondre will be destroyed!

Companions such as Hope Estheim, well known friend of lightning will help you. Sometimes you have to fight your old friends to make them listen to reason or give them hope because some have abandoned the idea of living in a peaceful world as it was in the XIII-2. Do not forget Lumina who seem to know much about Ligthning and her sister..

The game system is dynamic, constantly changing according to your choice, with a battle system similar to Final Fantasy XIII and XIII-2 and based on the Active Time Battle system. Only lightning is playable but the gameplay has been seriously improved. Now you can run, jump, climb and slide down ramps, a marvel.

Change held during the battles allow you to use one of three fighting styles of heroin, it provides ultra paced fights. You can also customize clothes and accessories to equip for more fun. The bestiary is also changing, you can kill some animal species to their extinction!

EU STEAM CD KEY: Requires an EUROPEAN IP address or you must activate it with a VPN (Virtual Private Network) in order to play Lightning Returns Final Fantasy 13. Might have languages restrictions or language packs. Read the description on the store game page to know if the EU IP is only needed for activation or for playing also (maybe on EU Servers). Most of the stores offer you their help, or show you how to do this with a tutorial to follow.
STEAM CD KEY : Use the Steam Key Code on Steam Platform to download and play Lightning Returns Final Fantasy 13. You must login to your Steam Account or create one for free. Download the (Steam Client HERE). Then once you login, click Add a Game (located in the bottom Left corner) -> Activate a Product on Steam. There type in your CD Key and the game will be activated and added to your Steam account game library.
Standard Edition
Compare Choose & Buy Download (710)

Ordered mine from CJS CD Keys, but no stock despite this site saying they have and their “the keys will be replenished within 12 hours” message is a lie!

Luckily I’m still finishing up some other games right now so I can wait until they finish restocking, but I’m not impressed with CJS CD Keys one bit….

Screwed up on the rating, didn’t intend to give 5 stars. My bad, sorry.

yet another final fantasy game that will offer an awesome experience, story and battles

FInal Fantasy is a great gaming series, I played every single one of them