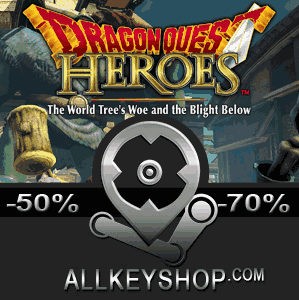 It's a digital key that allows you to download Dragon Quest Heroes directly to PC from the official Platforms.

How can I find the best prices for Dragon Quest Heroes CD keys?

Allkeyshop.com compares the cheapest prices of Dragon Quest Heroes on the digital downloads market to find the best sales and discount codes on trusted stores.

Dragon Quest Heroes is a action RPG developed by Omega Force and published by Square Enix.

In the kingdom of Arab monsters and mankind have always lived together in peace until suddenly the monsters decide to start attacking.

You will begin with two characters a male and a female and will eventually be given the chance to add more characters to your party. It’s up to you to figure out what has happened and to protect the humans from attacking monsters in the meantime.

While the characters in the story tend to be a bit stereotypical it is none the less enjoyable to play and observe the interaction between each of them. Fighting relies heavily on melee though you are given the option now and then to cast established spells when needed.

Graphics lean heavily towards cartoonish but allow for distinct characteristics and expression of each personality. Interaction between the different characters can often times be very humorous with running jokes carried on through the series or when the situation calls for it.

EU STEAM CD KEY: Requires an EUROPEAN IP address or you must activate it with a VPN (Virtual Private Network) in order to play Dragon Quest Heroes. Might have languages restrictions or language packs. Read the description on the store game page to know if the EU IP is only needed for activation or for playing also (maybe on EU Servers). Most of the stores offer you their help, or show you how to do this with a tutorial to follow.
STEAM CD KEY : Use the Steam Key Code on Steam Platform to download and play Dragon Quest Heroes. You must login to your Steam Account or create one for free. Download the (Steam Client HERE). Then once you login, click Add a Game (located in the bottom Left corner) -> Activate a Product on Steam. There type in your CD Key and the game will be activated and added to your Steam account game library.
Standard Edition
Compare Choose & Buy Download (710)

This game seems to be a good DW-Like but i need a better discount on it :p

F. This game is very great I am a big fan of this game thank you allkeyshop

I want this game. Is it as fun to play as it is to look at