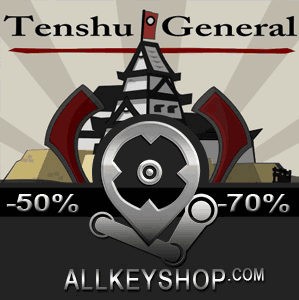 What is Tenshu General CD key?

It's a digital key that allows you to download Tenshu General directly to PC from the official Platforms.

How can I find the best prices for Tenshu General CD keys?

Allkeyshop.com compares the cheapest prices of Tenshu General on the digital downloads market to find the best sales and discount codes on trusted stores.

Tenshu General is a kind of strategy game in real time, it is developed by SmartArt Game Studio and edited by Tenshu General.

It is a mix between a board game and the classic RTS. The game is set during the Japanese feudal era, you play the role of a general who is attempting to defend his castle (tenshu) from invasions, as well as extend its territory to capture the tenshu that belong to other regions.

It is also notable that the parties are simple and fast but this does not degrade the gameplay. So if your playing time is limited, or if you are fans of games like Risk then this is the right game for you.

STEAM CD KEY : Use the Steam Key Code on Steam Platform to download and play Tenshu General. You must login to your Steam Account or create one for free. Download the (Steam Client HERE). Then once you login, click Add a Game (located in the bottom Left corner) -> Activate a Product on Steam. There type in your CD Key and the game will be activated and added to your Steam account game library.
Standard Edition
Compare Choose & Buy Download (689)