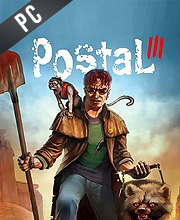 What is Postal 3 CD key?

It's a digital key that allows you to download Postal 3 directly to PC from the official Platforms.

How can I find the best prices for Postal 3 CD keys?

Allkeyshop.com compares the cheapest prices of Postal 3 on the digital downloads market to find the best sales and discount codes on trusted stores.

Postal 3 is an action/third-person shooter video game produced and developed by Akella and the third of its series.

Paradise City is gone after the Postal Dude blew it up with a nuclear bomb from the previous series. Postal Dude’s next location is now Paradise’s sister city which is named Catharsis. As he drives into the city, he and his pitbull Champ are welcomed by an economic crisis and government corruption making this city a really bad place to live in. He plans to leave the city however he has no money in his pockets for gas. He has no choice but to stay in the city and work for money.

While looking for work, the Postal Dude has the option for either the “good path” or the “bad path.” The good path means that you get to work with the Catharsis Police force and fight crime and bring back justice. The bad path is joining the evil plans of Mayor Chomo and Uncle Dave. Choosing the good path has a longer story than the bad path.

Since there are two choices of story lines there are also multiple endings for the game depending on the path you chose as well as for the decisions that you will be doing in the game. But regardless of what you choose and what the ending may be, the Postal Dude will say “I regret nothing!”

PUBLISHER WEBSITE CD KEY: Use the CD Key Code to download directly on the Official Website or from the store to play Postal 3. Follow the instructions given by the store. Verify languages available and possible region restrictions before buying.
EU STEAM CD KEY: Requires an EUROPEAN IP address or you must activate it with a VPN (Virtual Private Network) in order to play Postal 3. Might have languages restrictions or language packs. Read the description on the store game page to know if the EU IP is only needed for activation or for playing also (maybe on EU Servers). Most of the stores offer you their help, or show you how to do this with a tutorial to follow.
STEAM CD KEY : Use the Steam Key Code on Steam Platform to download and play Postal 3. You must login to your Steam Account or create one for free. Download the (Steam Client HERE). Then once you login, click Add a Game (located in the bottom Left corner) -> Activate a Product on Steam. There type in your CD Key and the game will be activated and added to your Steam account game library.
Standard Edition
Compare Choose & Buy Download (689)