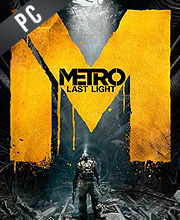 It's a digital key that allows you to download Metro Last Light directly to PC from the official Platforms.

How can I find the best prices for Metro Last Light CD keys?

Allkeyshop.com compares the cheapest prices of Metro Last Light on the digital downloads market to find the best sales and discount codes on trusted stores.

Metro: Last Light is an unusual, meticulously detailed shooter inextricable from its environment – making its refuge in the post-apocalyptic Moscow, a land forgotten and abandoned . The survival and shooting aspects engage with what is considered valuable in the game world, and both leave ample room for moments of solace, exploration and concise violence. It runs in next-gen visuals at a whopping 60FPS!

Brave the horrors of the Russian apocalypse – equip your gasmask and an arsenal of hand-made weaponry as you face the threat of deadly mutants, human foes, and the harsh and terrifying environment itself! You can play the game in your own way by choosing a strategy. Go “Spartan” or “Survival” – approach the game as a slowly but surely Survival Horror, or tackle it with the combat skills of a Spartan Ranger in these two unique modes.

This is an absolutely beautiful example of what a PC game should look like. The intense and unique atmosphere brought by the dark metro seen like never before along with a great written storyline and apocalyptic landscapes of the ruin of Moscow makes of this game truly a masterpiece.

GOG.COM CD KEY : You need to register on Gog.com, then use the GOG Key to download and activate your game to play Metro Last Light.
EU STEAM CD KEY: Requires an EUROPEAN IP address or you must activate it with a VPN (Virtual Private Network) in order to play Metro Last Light. Might have languages restrictions or language packs. Read the description on the store game page to know if the EU IP is only needed for activation or for playing also (maybe on EU Servers). Most of the stores offer you their help, or show you how to do this with a tutorial to follow.
STEAM GIFT : A Steam gift is a one-time transfer you receive. You activate and install Metro Last Light to play on Steam, it is a non-refundable game that stays in your Steam games collection. Please read the store description about any language or region restrictions.
STEAM CD KEY : Use the Steam Key Code on Steam Platform to download and play Metro Last Light. You must login to your Steam Account or create one for free. Download the (Steam Client HERE). Then once you login, click Add a Game (located in the bottom Left corner) -> Activate a Product on Steam. There type in your CD Key and the game will be activated and added to your Steam account game library.
Bundle
Complete Edition
Limited Edition
Pack X2
Standard Edition

MY SISTER GAVE ME THE GAME METRO LAST LIGHT, THERE WERE NO KEY CODE IN IT, I CAN NOT PLAY, HELP

Did you already contact the store where you bought the game? We highly suggest you to talk to the sellers customer support page for them to be able to provide assistance regarding this matter.

If you have more questions feel free to contact us again through our Live Chat Service, or leave us a message if we are offline.

Excellent offer days for this great game, don’t miss it!

Super Game! A lot of interesting shooting and great atmosphere!

This game in one word is a Masterpiece, the innormos amount of effort placed into making this game has definitly paid out, I played the game two times, on both modes, and it was very satisfying, Honestly I have not even a single critic on this game, thank you for working so hard to make this masterpiece.