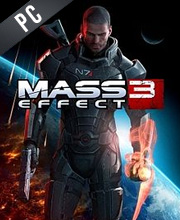 What is Mass Effect 3 CD key?

It's a digital key that allows you to download Mass Effect 3 directly to PC from the official Platforms.

How can I find the best prices for Mass Effect 3 CD keys?

Allkeyshop.com compares the cheapest prices of Mass Effect 3 on the digital downloads market to find the best sales and discount codes on trusted stores.

It is the end of the world as the Reapers have taken over. You are humanity’s only hope as you lead the final fight against the invaders.

Anyone who has invested any amount of time in the previous games will enjoy watching the final chapter of Shepard’s tale unfold, and among the feelings of excitement and joy as they meet and fight alongside old friends for the fate of the galaxy, they will also feel just a tinge of disappointment and heartbreak as they bid farewell to the colorful universe and memorable characters BioWare has created.

An absolutely amazing game, one that successfully puts a bow on the Mass Effect trilogy while still leaving us hungry for even more. It looks and plays great, but Mass Effect 3’s true strength lies in its ability to tell a deeply-woven story.

ORIGIN CD KEY : Use the Origin Key Code (Electronic Arts - EA) on Origin Platform to download and play Mass Effect 3. You have to login to your Origin Account or create one for free. Download and install the Origin Software HERE) then you can activate the game on it. Once installed, start Origin, click on the Origin Tab and click on Redeem Product Code and just enter the key. The game will appear in your My games list.
STEAM GIFT : A Steam gift is a one-time transfer you receive. You activate and install Mass Effect 3 to play on Steam, it is a non-refundable game that stays in your Steam games collection. Please read the store description about any language or region restrictions.
Deluxe Edition
Standard Edition

Fun game, with good story with good price is a good game

guy’s i have a question can i win the mass effect product code if i win the lottery ?

Hello Hoshang, yes of course. If you won from our Win A Game of Your Choice lottery and giveaway. Good luck! 🙂

great game i really did enjoy playing it!. game has really good graphics and FPS, for what could you as more!, game is solid and i like it and Recommend it!

Seems like one of the best prices on the web