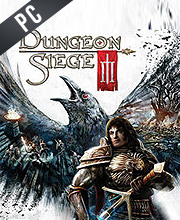 What is Dungeon Siege 3 CD key?

It's a digital key that allows you to download Dungeon Siege 3 directly to PC from the official Platforms.

How can I find the best prices for Dungeon Siege 3 CD keys?

Allkeyshop.com compares the cheapest prices of Dungeon Siege 3 on the digital downloads market to find the best sales and discount codes on trusted stores.

This game is an Action RPG that easily blends intuitive fast-paced gameplay and a robust RPG system. It offers a large number of abilities, a looting system and the depth of story that made Square-Enix and Obsidian Entertainment famous.Gamers will be able to go on an adventure, on the couch with friends, or online in a fully polished multiplayer system. You take on the role of an heir to the legion and you will be accepting Ehb’s call for help. How the story goes is up to you!

The combat is challenging, and each playable character brings a feeling of uniqueness to the combat. The followers add support when needed and the loot system is decent, that makes upgrading truly rewarding. Watching your gear change as you gain levels is as satisfying as it is in any other well-done RPG.

One of the best isometric action games there is. Definitely a good game. Four playable classes, a variety of upgrades and a very wide variety of abilities. It is a must buy for any Adventurers-at-heart.

Zoom 1m 3m 1y All
Track product
GOG.COM CD KEY : You need to register on Gog.com, then use the GOG Key to download and activate your game to play Dungeon Siege 3.
EU STEAM CD KEY: Requires an EUROPEAN IP address or you must activate it with a VPN (Virtual Private Network) in order to play Dungeon Siege 3. Might have languages restrictions or language packs. Read the description on the store game page to know if the EU IP is only needed for activation or for playing also (maybe on EU Servers). Most of the stores offer you their help, or show you how to do this with a tutorial to follow.
STEAM GIFT : A Steam gift is a one-time transfer you receive. You activate and install Dungeon Siege 3 to play on Steam, it is a non-refundable game that stays in your Steam games collection. Please read the store description about any language or region restrictions.
STEAM CD KEY : Use the Steam Key Code on Steam Platform to download and play Dungeon Siege 3. You must login to your Steam Account or create one for free. Download the (Steam Client HERE). Then once you login, click Add a Game (located in the bottom Left corner) -> Activate a Product on Steam. There type in your CD Key and the game will be activated and added to your Steam account game library.
STEAM POLAND CD KEY : Steam Key from Poland to download and play Dungeon Siege 3 with English and Polish language only. Read the store description carefully about languages and restrictions.
Bundle
Collection
Complete Edition
Standard Edition
Compare Choose & Buy Download (772)