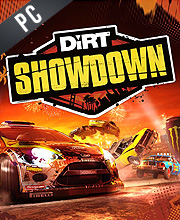 What is Dirt Showdown CD key?

It's a digital key that allows you to download Dirt Showdown directly to PC from the official Platforms.

How can I find the best prices for Dirt Showdown CD keys?

Allkeyshop.com compares the cheapest prices of Dirt Showdown on the digital downloads market to find the best sales and discount codes on trusted stores.

A whole new world of full impact, no-holds barred racing is waiting for you to be experienced in Dirt Showdown! Your objective in the game is to enter a series of Tour events which offer a wide range of races and tournaments you can compete in. Winning in these events will reward you with cold cash which you can spend for new cars, upgrade your existing cars, or unlock other race modes. Successfully complete the series and get to unlock the next difficulty setting which features faster opponents and longer races!

There are four gameplay mode classifications where each one has its own types of races you can enjoy. The Racing Mode includes the Race-Off, Domination, and Elimination. The Demolition Mode includes Rampage, Knock Out, Hard Target and 8-Ball. Under the Hoonigan Mode are Trick Rush, Head 2Head, and Smash Hunter. And finally, the multiplayer-only Party Mode comprises of Smash & Grab, Transporter, and Speed Skirmish.

So what are you waiting for? Go ahead and experience a showdown like no other in Dirt Showdown!

EU STEAM CD KEY: Requires an EUROPEAN IP address or you must activate it with a VPN (Virtual Private Network) in order to play Dirt Showdown. Might have languages restrictions or language packs. Read the description on the store game page to know if the EU IP is only needed for activation or for playing also (maybe on EU Servers). Most of the stores offer you their help, or show you how to do this with a tutorial to follow.
STEAM GIFT : A Steam gift is a one-time transfer you receive. You activate and install Dirt Showdown to play on Steam, it is a non-refundable game that stays in your Steam games collection. Please read the store description about any language or region restrictions.
STEAM CD KEY : Use the Steam Key Code on Steam Platform to download and play Dirt Showdown. You must login to your Steam Account or create one for free. Download the (Steam Client HERE). Then once you login, click Add a Game (located in the bottom Left corner) -> Activate a Product on Steam. There type in your CD Key and the game will be activated and added to your Steam account game library.
Bundle
Standard Edition

Played it, i like dirt 2 more than this one, it’s too similar to dirt 3… 4 starts to this game, it’s much better than Grid Autosports or grid II. Buy a wheel and enjoy this game!!