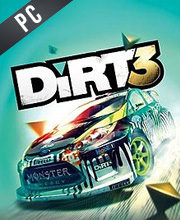 It's a digital key that allows you to download Dirt 3 directly to PC from the official Platforms.

How can I find the best prices for Dirt 3 CD keys?

Allkeyshop.com compares the cheapest prices of Dirt 3 on the digital downloads market to find the best sales and discount codes on trusted stores.

Dirt 3 is a game published and developed by Codemasters. This is third installment of the Dirt series. You will have a choice of one of sixty cars available (we find big brands and prestigious models) to participate in no less than six game modes. You can play solo, local multiplayer (split screen) or online multiplayer!

The Dirt’s trademark is its crazy races including changing rules from race to race. Dirt 3 is graphically and aesthetically pleasing to even the most demanding driver. You may need a few laps to fully understand your vehicle especially since you will end up racing on snow and ice! Also new is a game mode as arena similar to a skate park, but for cars! Riddled with obstacles, you have to make figures, drifts, all to do combos that allow you to inflame the crowd and drive up the applause, since it is the sound of the audience that will be your judged !

In short, Dirt 3 is a racing game like no other very catchy and addictive!

EU STEAM CD KEY: Requires an EUROPEAN IP address or you must activate it with a VPN (Virtual Private Network) in order to play Dirt 3. Might have languages restrictions or language packs. Read the description on the store game page to know if the EU IP is only needed for activation or for playing also (maybe on EU Servers). Most of the stores offer you their help, or show you how to do this with a tutorial to follow.
STEAM GIFT : A Steam gift is a one-time transfer you receive. You activate and install Dirt 3 to play on Steam, it is a non-refundable game that stays in your Steam games collection. Please read the store description about any language or region restrictions.
STEAM CD KEY : Use the Steam Key Code on Steam Platform to download and play Dirt 3. You must login to your Steam Account or create one for free. Download the (Steam Client HERE). Then once you login, click Add a Game (located in the bottom Left corner) -> Activate a Product on Steam. There type in your CD Key and the game will be activated and added to your Steam account game library.
XBOX ONE GAME CODE : Use the Digital Code received by mail in your Xbox One account to download Dirt 3 from the Xbox Live. Internet connection is required. Please read the store description about any language or region restrictions.
Complete Edition
Standard Edition
Compare Choose & Buy Download (583)

Get ready for DiRT 3! Race through the snow, rain and dirt and experience dramatic night races with the most amount of rally content in the series yet.