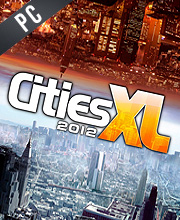 It's a digital key that allows you to download Cities XL 2012 directly to PC from the official Platforms.

How can I find the best prices for Cities XL 2012 CD keys?

Allkeyshop.com compares the cheapest prices of Cities XL 2012 on the digital downloads market to find the best sales and discount codes on trusted stores.

Cities XL 2012 is a city simulator developed by Focus Home Interactive. It is the third installment in the Cities XL franchise.

So, what do you get in Cities XL 2012? Focusing mainly on a single-player mode, this game features new maps, a staggering number of new unique structures and a starter guide. Mechanics follow the modern city-building template laid out in its predecessor. The varied maps consist of different environments that look impressive from afar and up close. The smooth, intuitive interface keeps things humming and the cartoonish graphics with catchy sound effects and music add to the easygoing atmosphere.

Experience how to become an effective real urban planner and bring balance in economic & energy developments of the cities and also manage transportation, housing, social services and recreational activities all throughout the game.

Are you excited to build your own epic, huge city and drive planes, cars, trains and a whole lot more in this awesome open world masterpiece? Its addictive nature will surely get you hooked for plenty of pleasurable hours and you’ll keep coming back for more!

ORIGIN CD KEY : Use the Origin Key Code (Electronic Arts - EA) on Origin Platform to download and play Cities XL 2012. You have to login to your Origin Account or create one for free. Download and install the Origin Software HERE) then you can activate the game on it. Once installed, start Origin, click on the Origin Tab and click on Redeem Product Code and just enter the key. The game will appear in your My games list.
PUBLISHER WEBSITE CD KEY: Use the CD Key Code to download directly on the Official Website or from the store to play Cities XL 2012. Follow the instructions given by the store. Verify languages available and possible region restrictions before buying.
STEAM GIFT : A Steam gift is a one-time transfer you receive. You activate and install Cities XL 2012 to play on Steam, it is a non-refundable game that stays in your Steam games collection. Please read the store description about any language or region restrictions.
STEAM CD KEY : Use the Steam Key Code on Steam Platform to download and play Cities XL 2012. You must login to your Steam Account or create one for free. Download the (Steam Client HERE). Then once you login, click Add a Game (located in the bottom Left corner) -> Activate a Product on Steam. There type in your CD Key and the game will be activated and added to your Steam account game library.
Standard Edition