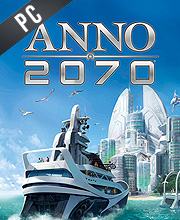 It's a digital key that allows you to download Anno 2070 directly to PC from the official Platforms.

Allkeyshop.com compares the cheapest prices of Anno 2070 on the digital downloads market to find the best sales and discount codes on trusted stores.

Anno 2070 is a city-building and economic simulation game, with real-time strategy elements. It is the 5th game of the Anno series. Developed by BlueByte and published by Related Designs.

The scenario is set in the year 2070. Global warming has melted the Arctic ice cap, which has raised the global sea level so that the coasts were flooded. As a result, many old cities have vanished under the ocean, and much of what was once highland has been turned into chains of new islands. Responsibility for settling and exploiting these new frontiers is given to a select group of people, who captain mobile ocean-going bases known as Arks.

In Anno 2070, politics are no longer defined by countries, boundaries, religions, races, etc., but how humans choose to produce energy. All humankind rally under one global government where the three main factions of the game control the world’s decisions. Players can also vote for a World President and vote in Senate Council. Participation will give different effects to all players, depending on who is president or what bill was passed, until the next cycle of voting begins. For example, voting for the Tycoons’ CEO Skylar Banes will increase productivity of manufacturing buildings.

ANNO games are all great products, among the best management games.

I had a great time playing Anno 2070. It’s a fun RTS/sim. I recommend buying the Complete Edition