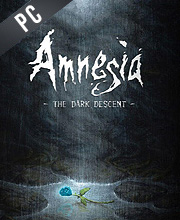 What is Amnesia The Dark Descent CD key?

It's a digital key that allows you to download Amnesia The Dark Descent directly to PC from the official Platforms.

How can I find the best prices for Amnesia The Dark Descent CD keys?

Allkeyshop.com compares the cheapest prices of Amnesia The Dark Descent on the digital downloads market to find the best sales and discount codes on trusted stores.

Amnesia The Dark Descent is an indie action adventure game developed and published by Fictional Games. It is a survival horror game set in 1839 featuring a protagonist named Daniel, a young man from London, who awakens himself in a dark and foreboding castle where he remembers nothing but only his name and the place where he lives.

The game gives the player a feeling of suspense and excitement. Also, the player can interact with the environment which gives him a variety of ways to explore the surroundings, such as moving objects from one place to another, opening doors and closets, picking up items and operating levers.

In this game, there are no available weapons to use and no combat tactics provided which makes the player unable to fight enemies that he will encounter along the game. The only way for the player to get past the enemies is to avoid them by running away, hiding in the shadows, in the closets and barricading doors etc.

One of the challenges that the player will face is that of Daniel’s health. Being stuck in the darkness for a long enough time and staring at monsters and witnessing unsettling events will influence the character’s sanity. Which causes him to hallucinate and draw the attention of the enemy monsters.

There are ways to avoid such situations like light sources, which helps restore Daniel’s sanity. If none is available, the player may use tinderboxes to ignite candles on the walls or by deploying an oil-burning lantern. However, these are limited resources and standing near the light will make you vulnerable to the monsters.

Can you face your fears, or will you forever hide alone in the darkness?

Collection: Amnesia: The Dark Descent + Amnesia: A Machine for Pigs

Zoom 1m 3m 1y All
Track product
EPIC GAMES KEY : Region Free / Worldwide. Requires Epic Games Launcher App in order to play the game. You need to create a free account here in order to download Amnesia The Dark Descent from Epic Plateform . Read the description on the store page about any language or country restrictions.
GOG.COM CD KEY : You need to register on Gog.com, then use the GOG Key to download and activate your game to play Amnesia The Dark Descent.
PUBLISHER WEBSITE CD KEY: Use the CD Key Code to download directly on the Official Website or from the store to play Amnesia The Dark Descent. Follow the instructions given by the store. Verify languages available and possible region restrictions before buying.
EU STEAM CD KEY: Requires an EUROPEAN IP address or you must activate it with a VPN (Virtual Private Network) in order to play Amnesia The Dark Descent. Might have languages restrictions or language packs. Read the description on the store game page to know if the EU IP is only needed for activation or for playing also (maybe on EU Servers). Most of the stores offer you their help, or show you how to do this with a tutorial to follow.
STEAM GIFT : A Steam gift is a one-time transfer you receive. You activate and install Amnesia The Dark Descent to play on Steam, it is a non-refundable game that stays in your Steam games collection. Please read the store description about any language or region restrictions.
STEAM CD KEY : Use the Steam Key Code on Steam Platform to download and play Amnesia The Dark Descent. You must login to your Steam Account or create one for free. Download the (Steam Client HERE). Then once you login, click Add a Game (located in the bottom Left corner) -> Activate a Product on Steam. There type in your CD Key and the game will be activated and added to your Steam account game library.
Bundle
Collection
Standard Edition
Compare Choose & Buy Download (743)

This game almost killed me It was very interresting!

i love this game really scary

This game almost killed me. It was very disturbing, but interresting.