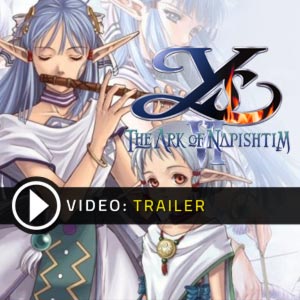 What is YS VI The Ark Of Napishtim CD key?

It's a digital key that allows you to download YS VI The Ark Of Napishtim directly to PC from the official Platforms.

How can I find the best prices for YS VI The Ark Of Napishtim CD keys?

Allkeyshop.com compares the cheapest prices of YS VI The Ark Of Napishtim on the digital downloads market to find the best sales and discount codes on trusted stores.

Ys VI: The Ark of Napishtim is a Japanese action role-playing game developed and published by the Nihon Falcom Corporation, and is the sixth episode in the Ys video game series.

The adventure begins after Adol is swept off a vessel during the Romuns’ attack and washed ashore by the whirlpool that surrounds the Canaan Islands in yet another isolated land to explore. You will play the role of an adventurer extraordinaire Adol Christin as countless interesting adventures await set on a mysterious island where people with long ears and bushy tails who are not too fond of humans live.

Backdrops, characters, monsters and bosses are presented in 3D graphics. Ys VI offers wider possibilities on the game’s mechanics as introduced in the previous Ys sequels that players are able control over Adol with much ease including the ability to jump and control his attacks.

As expected, Ys VI still maintains its charisma and appealing elements as what the series is known for. It’s captivating and offers just the right amount of complexity as an action RPG which will certainly give the players a stunning experience for dozens of hours.

GOG.COM CD KEY : You need to register on Gog.com, then use the GOG Key to download and activate your game to play YS VI The Ark Of Napishtim.
STEAM CD KEY : Use the Steam Key Code on Steam Platform to download and play YS VI The Ark Of Napishtim. You must login to your Steam Account or create one for free. Download the (Steam Client HERE). Then once you login, click Add a Game (located in the bottom Left corner) -> Activate a Product on Steam. There type in your CD Key and the game will be activated and added to your Steam account game library.
Standard Edition