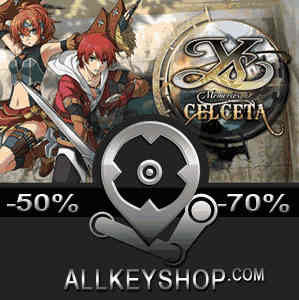 What is YS Memories of Celceta CD key?

It's a digital key that allows you to download YS Memories of Celceta directly to PC from the official Platforms.

How can I find the best prices for YS Memories of Celceta CD keys?

Allkeyshop.com compares the cheapest prices of YS Memories of Celceta on the digital downloads market to find the best sales and discount codes on trusted stores.

YS: Memories of Celceta is an action, role-playing video game that is developed by Nihon Falcom and published by XSEED Games and Marvelous USA, Inc.

Play as the red-haired adventurer Adol Christin who wakes up without any memory in the strange land of Celceta. With the only thing he remembers is his name, Adol Wanders into the town to search for anything that could remind him of who he is. He is joined by a thief who said that he has been with Adol for the past weeks and they happen to come across an accident. They were able to save the people from the accident which earned him the favor of the local Romun Army general. Because of the pair’s great skill, they were enlisted in exploring the Great Forest of Celceta and then map it out.

As they set on their journey, Adol is eager to learn more about his past. He will meet different characters who claim to know him but he must be wary and must choose wisely who to trust.

This remaster features a lot of PC enhancements like HD resolutions, and up to 120 fps frame rates. There is a fully customizable control bindings as well as a fully integrated mouse support.

The fan favorite Time Attack is making a comeback and it is complete with the ultimate Boss Rush challenge. Steam leaderboards have also been implemented which is accessible even when in-game.

Help Adol remember his past as he and his friends map out the unfamiliar land of Celceta.

EUROPEAN STEAM GIFT : It’s a steam gift for Europe which requires an European IP address to activate and to play YS Memories of Celceta on Steam. Read carefully the store description about region and language restrictions.
STEAM CD KEY : Use the Steam Key Code on Steam Platform to download and play YS Memories of Celceta. You must login to your Steam Account or create one for free. Download the (Steam Client HERE). Then once you login, click Add a Game (located in the bottom Left corner) -> Activate a Product on Steam. There type in your CD Key and the game will be activated and added to your Steam account game library.
GOG.COM CD KEY : You need to register on Gog.com, then use the GOG Key to download and activate your game to play YS Memories of Celceta.
STEAM GIFT : A Steam gift is a one-time transfer you receive. You activate and install YS Memories of Celceta to play on Steam, it is a non-refundable game that stays in your Steam games collection. Please read the store description about any language or region restrictions.
Standard Edition. Read the store description to know the content.

Be the first one to write a review about YS Memories of Celceta !