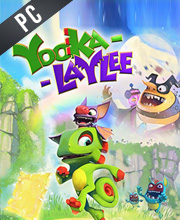 What is Yooka-Laylee CD key?

It's a digital key that allows you to download Yooka-Laylee directly to PC from the official Platforms.

How can I find the best prices for Yooka-Laylee CD keys?

Allkeyshop.com compares the cheapest prices of Yooka-Laylee on the digital downloads market to find the best sales and discount codes on trusted stores.

Play as the duo Yooka and Laylee. Yooka is the chameleon and Laylee is a bat. With both their abilities hinder the enemy Capital B’s plan to get all of the world’s books and keep the profit for himself.

Our heroes will explore a vast and beautiful world to solve puzzles and finish platforming trials. Collect all the golden book pages called “Pagies”. These are the in-game currency allowing you to unlock and expand new worlds.

There are so many quirky characters in the game to meet as well as so many shiny objects to collect.

Pair up with a friend in the co-op mode. The second player will be able to assist the duo Yooka and Laylee in completing the challenges set before them.

There are more than 8 multiplayer games available that will keep you entertained for hours. Experience the boss fights, arcade games, quiz shows as well as the mine cart challenges that Yooka-Laylee offers.

Buy Yooka-Laylee and have a blast playing!

Zoom 1m 3m 1y All
Track product
EPIC GAMES KEY : Region Free / Worldwide. Requires Epic Games Launcher App in order to play the game. You need to create a free account here in order to download Yooka-Laylee from Epic Plateform . Read the description on the store page about any language or country restrictions.
GOG.COM CD KEY : You need to register on Gog.com, then use the GOG Key to download and activate your game to play Yooka-Laylee.
ORIGIN CD KEY : Use the Origin Key Code (Electronic Arts - EA) on Origin Platform to download and play Yooka-Laylee. You have to login to your Origin Account or create one for free. Download and install the Origin Software HERE) then you can activate the game on it. Once installed, start Origin, click on the Origin Tab and click on Redeem Product Code and just enter the key. The game will appear in your My games list.
EU STEAM CD KEY: Requires an EUROPEAN IP address or you must activate it with a VPN (Virtual Private Network) in order to play Yooka-Laylee. Might have languages restrictions or language packs. Read the description on the store game page to know if the EU IP is only needed for activation or for playing also (maybe on EU Servers). Most of the stores offer you their help, or show you how to do this with a tutorial to follow.
STEAM CD KEY : Use the Steam Key Code on Steam Platform to download and play Yooka-Laylee. You must login to your Steam Account or create one for free. Download the (Steam Client HERE). Then once you login, click Add a Game (located in the bottom Left corner) -> Activate a Product on Steam. There type in your CD Key and the game will be activated and added to your Steam account game library.
STEAM KEY ROW : It means for Rest Of the World countries which are not concerned by the region restrictions. This product can't be purchased and activated in Several countries. Please read the store description to know the full list of countries which are concerned. Use the key to Download and play Yooka-Laylee on Steam.
EU XBOX ONE GAME CODE : Xbox Live Game Code for EUROPE ONLY. Use the Digital Code received by mail in your Xbox One account to download Yooka-Laylee from the Xbox Live. Internet connection is required. Please read the store description about any language or region restrictions.
Bundle
Deluxe Edition
Standard Edition
Compare Choose & Buy Download (743)

that gamersgate price of 2.29€ is incorrect, it’s £21.50 on their website, again I got my hopes raised, Kinguin is the cheapest!

wooow allkeyshop and “G2 Play” are the most cheap sites to buy Yooka Laylee cd-keys. If you’re looking for a more cheap deluxe edition, then I recommend

“Kinguin” and “G2 Play” are the most cheap sites to buy Yooka Laylee cd-keys. If you’re looking for a more cheap deluxe edition, then I recommend “SaveMi”.