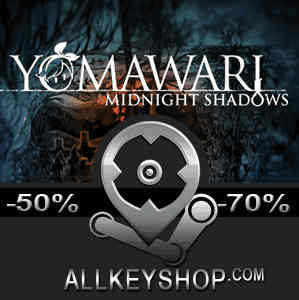 It's a digital key that allows you to download Yomawari Midnight Shadows directly to PC from the official Platforms.

How can I find the best prices for Yomawari Midnight Shadows CD keys?

Allkeyshop.com compares the cheapest prices of Yomawari Midnight Shadows on the digital downloads market to find the best sales and discount codes on trusted stores.

Two girls named Yui and Haru get lost as they are making their way home from a late summer fireworks festival in the mountains. They have been separated by a mysterious attacker and both girls must brave the town at night which looks completely different. Players are able to switch between the two girls during the gameplay.

The nighttime is full of wandering spirits and both girls are only equipped with flashlights. They have no means of attack so what they could do is to either run away, hide, or use a special item. You will know when spirits are near because the girl’s heart rate will go up. The spirits would have different characteristics and a different item could be used for different spirits. As you progress through the game, chains called Omamori are available for changing certain stats for both girls.

Will you be able to help Yui and Haru find each other? Or will they forever wander in the mysterious town and become spirits themselves?

EUROPEAN STEAM GIFT : It’s a steam gift for Europe which requires an European IP address to activate and to play Yomawari Midnight Shadows on Steam. Read carefully the store description about region and language restrictions.
STEAM CD KEY : Use the Steam Key Code on Steam Platform to download and play Yomawari Midnight Shadows. You must login to your Steam Account or create one for free. Download the (Steam Client HERE). Then once you login, click Add a Game (located in the bottom Left corner) -> Activate a Product on Steam. There type in your CD Key and the game will be activated and added to your Steam account game library.
Bundle
Limited Edition
Standard Edition