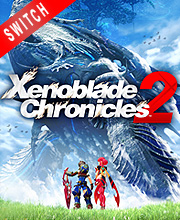 What is Xenoblade Chronicles 2 Game Code?

It's a digital key that allows you to download Xenoblade Chronicles 2 directly to Nintendo Switch directly from Nintendo eShop.

How can I find the best prices for Xenoblade Chronicles 2 on Nintendo Switch ?

Allkeyshop.com compares the cheapest prices of Xenoblade Chronicles 2 on the digital downloads market to find the best sales and discount codes on trusted stores.

Play as the protagonist named Rex with his friend Pyra as they search for the ultimate paradise for humanity called Elysium. The game is set in an endless sea of clouds and what is left of civilization is living on the backs of huge beast-like creatures that are called Titans.

The game is played just like any ARPG you will be able to control the main character in your party with two other characters. The environment has an open world design giving you the freedom to navigate throughout it and go wherever you want. There is also a night and day cycle available in the game that will greatly affect some events in the game along with item abilities, enemy strengths, and quests.

Xenoblade Chronicles 2 presents an original story and twists that will keep you hooked.

Be the first one to write a review about Xenoblade Chronicles 2 !