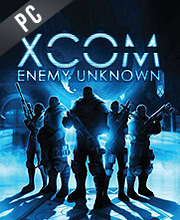 It's a digital key that allows you to download Xcom Enemy Unknown directly to PC from the official Platforms.

How can I find the best prices for Xcom Enemy Unknown CD keys?

Allkeyshop.com compares the cheapest prices of Xcom Enemy Unknown on the digital downloads market to find the best sales and discount codes on trusted stores.

The game is a “reimagined” remake of the 1994 strategy game UFO: Enemy Unknown, also called XCOM: UFO Defense, and it is also a reboot of the 1999 XCOM series by MicroPose.

The game is set during an alien invasion on Earth in the near future. You are given the task of defending the Earth against the alien forces and will control the XCOM, an elite multinational paramilitary organization. You will take on the role of an XCOM commander and command your troops (soldiers or robotic units) in a field through a series of turn-based missions that will also test your tactical skills.

The missions include tasks such as hunting aliens, and also objectives you need to complete in order to move on to the next phase of the game. Your soldiers carry items and are able to perform special abilities. Soldiers’ items and abilities can be gained as you survive more battles.

In-between missions, you would have to research and develop new technologies from existing alien technologies and some captured prisoners, expand your operations base, manage finances, and monitor and respond to alien activity.

The game also includes different levels of difficulty from “Classic” to “Impossible”, and each one gives you the option to enable the “Ironman” option. Take note, however, that the Ironman option will only limit you to a single save file all througout the game.

A one-on-one tactical battle multiplayer mode is also featured in the game where players spend a pre-defined amount of points for assembling a squad (6 humans, aliens, or both).

This game will not bag numerous awards for nothing. You’ll definitely play this one for a long time and never get tired of it.

GOG.COM CD KEY : You need to register on Gog.com, then use the GOG Key to download and activate your game to play Xcom Enemy Unknown.
EU STEAM CD KEY: Requires an EUROPEAN IP address or you must activate it with a VPN (Virtual Private Network) in order to play Xcom Enemy Unknown. Might have languages restrictions or language packs. Read the description on the store game page to know if the EU IP is only needed for activation or for playing also (maybe on EU Servers). Most of the stores offer you their help, or show you how to do this with a tutorial to follow.
STEAM GIFT : A Steam gift is a one-time transfer you receive. You activate and install Xcom Enemy Unknown to play on Steam, it is a non-refundable game that stays in your Steam games collection. Please read the store description about any language or region restrictions.
STEAM CD KEY : Use the Steam Key Code on Steam Platform to download and play Xcom Enemy Unknown. You must login to your Steam Account or create one for free. Download the (Steam Client HERE). Then once you login, click Add a Game (located in the bottom Left corner) -> Activate a Product on Steam. There type in your CD Key and the game will be activated and added to your Steam account game library.
STEAM KEY ROW : It means for Rest Of the World countries which are not concerned by the region restrictions. This product can't be purchased and activated in Several countries. Please read the store description to know the full list of countries which are concerned. Use the key to Download and play Xcom Enemy Unknown on Steam.
Bonus Edition
Bundle
Collection
Collector Edition
Complete Edition
Complete Pack
Content Pack
Standard Edition
Ultimate Collection
Compare Choose & Buy Download (583)

Good game with very interesting gameplay and nice graphics! For its price, worth it!

Xcom Enemy Unknown is a very good game, I would recommend it.

I recommend this game. Lots of strategy involved and fun guaranteed!

what an offer, only 2,50 via g2a shop.
surely gonna buy it.
thanks allkeyshop

great game and being giveaway by gog in this autumn