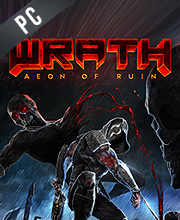 What is WRATH Aeon of Ruin CD key?

It's a digital key that allows you to download WRATH Aeon of Ruin directly to PC from the official Platforms.

How can I find the best prices for WRATH Aeon of Ruin CD keys?

Allkeyshop.com compares the cheapest prices of WRATH Aeon of Ruin on the digital downloads market to find the best sales and discount codes on trusted stores.

Wrath: Aeon of Ruin is an action video game that is developed by KillPixel and published by 3D Realms and 1C Entertainment.

You are known as the Outlander who had been lost upon the Ageless Sea. In the darkness, a cloaked figure known as the Shepherd of Wayward shows himself to you and asks you to hunt down the remaining Guardians of the Old World. There will be ancient ruins, forgotten secrets and lots of horrors to battle with.

The game is fueled by Quake 1 technology which embraces the elements of the classic titles like Doom, Quake, Duke Nukem 3D and more.

You will be equipped with 9 weapons as well as have an inventory of 10 powerful artifacts. To look for the Guardians of the Old World, you must go through ancient crypts, sunken ruins, corrupted temples, and scary forests.

The game is capped at 666 fps with software rendering support. Players are also able to create their own worlds that are easily moddable.

Play in classic multiplayer modes and play with other friends in the game’s 4 player co-op, Lan or online.

EPIC GAMES KEY : Region Free / Worldwide. Requires Epic Games Launcher App in order to play the game. You need to create a free account here in order to download WRATH Aeon of Ruin from Epic Plateform . Read the description on the store page about any language or country restrictions.
GOG.COM CD KEY : You need to register on Gog.com, then use the GOG Key to download and activate your game to play WRATH Aeon of Ruin.
EU STEAM CD KEY: Requires an EUROPEAN IP address or you must activate it with a VPN (Virtual Private Network) in order to play WRATH Aeon of Ruin. Might have languages restrictions or language packs. Read the description on the store game page to know if the EU IP is only needed for activation or for playing also (maybe on EU Servers). Most of the stores offer you their help, or show you how to do this with a tutorial to follow.
STEAM CD KEY : Use the Steam Key Code on Steam Platform to download and play WRATH Aeon of Ruin. You must login to your Steam Account or create one for free. Download the (Steam Client HERE). Then once you login, click Add a Game (located in the bottom Left corner) -> Activate a Product on Steam. There type in your CD Key and the game will be activated and added to your Steam account game library.
STEAM KEY ROW : It means for Rest Of the World countries which are not concerned by the region restrictions. This product can't be purchased and activated in Several countries. Please read the store description to know the full list of countries which are concerned. Use the key to Download and play WRATH Aeon of Ruin on Steam.
Early Access
Compare Choose & Buy Download (723)