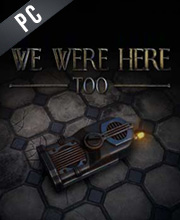 Buy We Were Here Too CD Key Compare Prices

What is We Were Here Too CD key?

It's a digital key that allows you to download We Were Here Too directly to PC from the official Platforms.

How can I find the best prices for We Were Here Too CD keys?

Allkeyshop.com compares the cheapest prices of We Were Here Too on the digital downloads market to find the best sales and discount codes on trusted stores.

Discover the fate that has befallen Castle Rock in this first-person online cooperative adventure. You and your partner are stuck in different parts of the castle and you must communicate with each other via walkie-talkie to escape.

The title is well thought through, but even an initial run is relatively short. However, puzzle fans will be entertained.

Working together with a partner to overcome obstacles is a great core concept at the heart of We Were Here Too, though as a castle escape game it isn’t particularly noteworthy beyond that.

We Were Here Too: Supporter Edition

We Were Here Too: Supporter Edition includes the special supporter borders, the exclusive supporter walkie-talkie skin, the mobile and desktop backgrounds, and the official We Were Here Too soundtrack.

We Were Here Too: The Soundtrack

We Were Here Too: The Soundtrack includes the 9 original soundtracks of the game composed by Leon van der Stel.

EUROPEAN STEAM GIFT : It’s a steam gift for Europe which requires an European IP address to activate and to play We Were Here Too on Steam. Read carefully the store description about region and language restrictions.
STEAM GIFT : A Steam gift is a one-time transfer you receive. You activate and install We Were Here Too to play on Steam, it is a non-refundable game that stays in your Steam games collection. Please read the store description about any language or region restrictions.
STEAM CD KEY : Use the Steam Key Code on Steam Platform to download and play We Were Here Too. You must login to your Steam Account or create one for free. Download the (Steam Client HERE). Then once you login, click Add a Game (located in the bottom Left corner) -> Activate a Product on Steam. There type in your CD Key and the game will be activated and added to your Steam account game library.
Bundle
Standard Edition

Very good….played 3 times and love it….it’s a good co op game and i want to buy “together” to see what they change