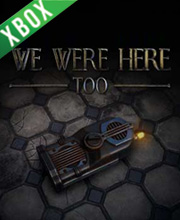 Buy We Were Here Too Xbox One Compare Prices

What is We Were Here Too Game Code?

It's a digital key that allows you to download We Were Here Too directly to Xbox One directly from Xbox Live.

How can I find the best prices for We Were Here Too on Xbox one?

Allkeyshop.com compares the cheapest prices of We Were Here Too on the digital downloads market to find the best sales and discount codes on trusted stores.

Discover the fate that has befallen Castle Rock in this first-person online cooperative adventure. You and your partner are stuck in different parts of the castle and you must communicate with each other via walkie-talkie to escape.

If you’re a puzzler fan and have a friend that is also like minded, then We Were Here Too should be absolutely on your radar, as this sequel will put your puzzle solving, and friendship, to the test.

I enjoyed We Were Here, and again Total Mayhem Games have made a beautiful, intricate and definitely more difficult game with this sequel.

We Were Here Too: Supporter Edition

We Were Here Too: Supporter Edition includes the special supporter borders, the exclusive supporter walkie-talkie skin, the mobile and desktop backgrounds, and the official We Were Here Too soundtrack.

We Were Here Too: The Soundtrack

We Were Here Too: The Soundtrack includes the 9 original soundtracks of the game composed by Leon van der Stel.

Be the first one to write a review about We Were Here Too !