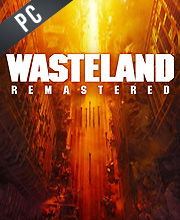 What is Wasteland Remastered CD key?

It's a digital key that allows you to download Wasteland Remastered directly to PC from the official Platforms.

How can I find the best prices for Wasteland Remastered CD keys?

Allkeyshop.com compares the cheapest prices of Wasteland Remastered on the digital downloads market to find the best sales and discount codes on trusted stores.

Wasteland first launched in 1988, it is a post-apocalyptic game that was able to inspire a genre.

You will play as a Desert Ranger, the reliable lawmen and the only hope for the American Southwest. The year is 2087 and it has almost been a century since a nuclear war has left earth in a radioactive hellscape. You are the only hope of those who have survived.

With the multiple threats around, another has arisen and it is much more menacing. You would have to investigate, but you don’t have to do it alone, you can recruit help and then follow the leads. Be careful of the choices that you make though, as it will show in the world around you.

Bug fixes were made and quality of life improvements were added as well as game controller support to make the game more friendlier.

Zoom 1m 3m 1y All
Track product
GOG.COM CD KEY : You need to register on Gog.com, then use the GOG Key to download and activate your game to play Wasteland Remastered.
EUROPEAN STEAM GIFT : It’s a steam gift for Europe which requires an European IP address to activate and to play Wasteland Remastered on Steam. Read carefully the store description about region and language restrictions.
STEAM GIFT : A Steam gift is a one-time transfer you receive. You activate and install Wasteland Remastered to play on Steam, it is a non-refundable game that stays in your Steam games collection. Please read the store description about any language or region restrictions.
STEAM CD KEY : Use the Steam Key Code on Steam Platform to download and play Wasteland Remastered. You must login to your Steam Account or create one for free. Download the (Steam Client HERE). Then once you login, click Add a Game (located in the bottom Left corner) -> Activate a Product on Steam. There type in your CD Key and the game will be activated and added to your Steam account game library.
PC Win 10 / Xbox Key. Digital code which allows you to play on both Xbox and Windows 10 PC. See below for more informations.
European PC Win 10 / Xbox Key. Digital code for EUROPE which allows you to play on both Xbox and Windows 10 PC in EUROPE. See below for more informations.
Standard Edition
Compare Choose & Buy Download (772)