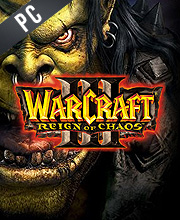 What is Warcraft 3 Reign of Chaos CD key?

It's a digital key that allows you to download Warcraft 3 Reign of Chaos directly to PC from the official Platforms.

How can I find the best prices for Warcraft 3 Reign of Chaos CD keys?

Allkeyshop.com compares the cheapest prices of Warcraft 3 Reign of Chaos on the digital downloads market to find the best sales and discount codes on trusted stores.

Warcraft begins. Cunning, sinister, and seemingly unstoppable, the demonic Burning Legion prepare to launch their long-awaited assault on the mortal world. Survival is a matter of strategy, as the Reign of Chaos begins.

Completely reinvented in glorious 3D, Warcraft III: Reign of Chaos spruces up the age-old premise—organize armies and send them into battle against opposing forces—with much-improved graphics and a new pyrotechnic spell-casting system. Astounding pre-rendered cinematics and a tightly woven storyline are backed by a substantial and varied single-player campaign.

Everything in the box, from the game itself to the terrific manual that has tons of info plus loads of extra background story for each of the races, is top notch and adds to the overall luster of the game. If you want to play a classic yet almost perfect RTS game then you should definitely play the game that started it all!

A timeless, influential game, with an incredible variety of gameplay options.