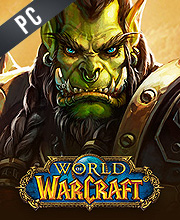 What is World of WarCraft CD key?

It's a digital key that allows you to download World of WarCraft directly to PC from the official Platforms.

How can I find the best prices for World of WarCraft CD keys?

Allkeyshop.com compares the cheapest prices of World of WarCraft on the digital downloads market to find the best sales and discount codes on trusted stores.

Set in the kingdom of Azeroth in which you choose to fight for one of two available factions: Horde or Alliance. Choose a character among the nine classes and eight races before creating a guild or choosing to join an existing one. Your journey will be bumpy so equip yourself with weapons that can handle monsters and the harsh environment waiting for you.

Addictive from the moment you begin…It’s incredibly friendly to the solo gamer, allowing players not only to gain Levels 1 to 60 without ever grouping with someone else if they prefer, but also to earn the same or more experience playing that way. That means the solo gamer can level nearly as quickly as a group of power gamers playing together.

The MMO we’ve all been waiting for. It does not blow away the genre, but it does hone it to near-perfection. I think the biggest problem you’ll have is managing to play it in moderation.

WoW Battle for Azeroth Expansion is the seventh expansion pack for the World of Warcraft series. This expansion pack includes a raised level cap from 110 to 120, The Kul Tiras and Zandalar continents and four allied races each for the Alliance and the Horde. There are additional dungeons, raids, warfronts, uncharted islands, and the implementation of “stat squish” and “item squish”.

World of Warcraft Path of Cenarius In-game Item where each card redeems for a stack of 100. This is usable at any level.

World Of Warcraft Swift Windsteed is a rare and majestic beast from Pandaria that can be mounted.

Find all the best prices for World of WarCraft DLCs on Allkeyshop!

World of Warcraft pre-paid time cards let you play the game without a credit card.

Zoom 1m 3m 1y All
Track product
BATTLENET EU CD KEY: European Battle.net Key to download and play World of WarCraft on EUROPEAN SERVERS. You must Activate the CD Key on your Battle.net Account or create one for free (HERE). Then, once you login on the Website, click Account Management ==> Add a new game. Enter the Key Code in the field below to add it to your Battle.net account. Once added you can Download the game on any computer at any time.
Battle Chest Edition
Bundle
Limited Edition
Standard Edition
Compare Choose & Buy Download (791)

The Gamivo 13.07 games is forever or a subscription?

Hi Ernesto,
Regarding your inquiry, the link will allow you to purchase the game bundle and should be available in your game library forever as long as your account is still active.
Prior to purchasing, we suggest that you first contact the store merchant regarding your concern to avoid any issues later on.
If you have other concerns, please send us a message at support@allkeyshop.com.

What are these keys? Cause the game itself is free anyways…

Its different editions it includes the followings.

Allkeyshop.com is the best! recommend. I love wow in general!