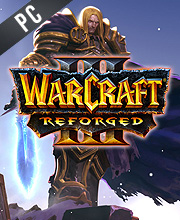 What is Warcraft 3 Reforged CD key?

It's a digital key that allows you to download Warcraft 3 Reforged directly to PC from the official Platforms.

How can I find the best prices for Warcraft 3 Reforged CD keys?

Allkeyshop.com compares the cheapest prices of Warcraft 3 Reforged on the digital downloads market to find the best sales and discount codes on trusted stores.

Warcraft 3: Reforged is a real-time strategy game that is developed and published by Blizzard Entertainment.

Reforged is a reimagining of a classic real-time strategy game from Azeroth’s lore. Offering an in-depth visual overhaul, having contemporary social and matchmaking features and so much more.

Get to re-experience the important events of Azeroth’s history like The foundling of Orgrimmar, The fall of Lordaeron, The reign of the Burning Legion, and the rise of the Lich King. Choose from the four factions, and play from each one’s point of view, from the Orcs, the Humans, Night Elves, and the Undead.

There are vast campaigns to relive like that of the World of Warcraft 3: Reign of Chaos and The Frozen Throne. The cutscenes had been re-shot and the voice-overs had been updated as well.

Each and every character, environment, and structure had been recreated where you are able to see dimension, depth, and personality. Get to see the game in glorious 4k with updated animations.

An upgraded World Editor as well as much modern multiplayer matchmaking, quality of life improvements, updated UI and so much more, had been added.

Looks great, can’t wait to play the campaign! Would be fun to see if there’s going to be a new DotA Allstars map 😀

one of the most haunting cinematics made by blizzard honestly. can’t wait to see arthas’ return to lordaeron updated.

good old W3 restaged, played it for weeks and definately one of the goodfathers of RTS