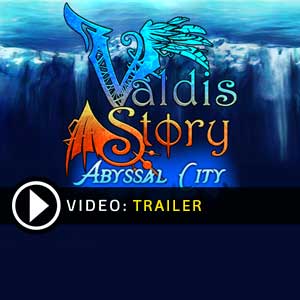 It's a digital key that allows you to download Valdis Story Abyssal City directly to PC from the official Platforms.

How can I find the best prices for Valdis Story Abyssal City CD keys?

Allkeyshop.com compares the cheapest prices of Valdis Story Abyssal City on the digital downloads market to find the best sales and discount codes on trusted stores.

Valdis Story: Abyssal City is a side scrolling action adventure published and developed by Endlessfluff Games.

A catchy and charming side scrolling battle platformer. Pretty art, interesting combat system with melee, spells, and a good mix of spells and items. You are WYATT, a member of a group of Warriors who happen to have their ship sunk by enemies unknown to man by word of the Goddess Valdys you are to regroup with other members of your crew and make way to the Goddess.

Along the way you will encounter friends that may or maynot help you in your quest and enemies such as various types of demons, angels, and a new threat tentatively known as Ferals. But in this Exploration/Action Platformer you not just play as WYATT you also get to play as other playable characters, each of whom has distinct play styles – not only from each other, but even with different builds of the same character, via the various weapons which you can use.

An amazing role-playing game, and one that should really be more popular considering its qualities. The structure is the one veteran gamers know and love, and it’s been improved with a balanced complex combat system and deep leveling and ability trees. Definitely a must have!

GOG.COM CD KEY : You need to register on Gog.com, then use the GOG Key to download and activate your game to play Valdis Story Abyssal City.
STEAM GIFT : A Steam gift is a one-time transfer you receive. You activate and install Valdis Story Abyssal City to play on Steam, it is a non-refundable game that stays in your Steam games collection. Please read the store description about any language or region restrictions.
STEAM CD KEY : Use the Steam Key Code on Steam Platform to download and play Valdis Story Abyssal City. You must login to your Steam Account or create one for free. Download the (Steam Client HERE). Then once you login, click Add a Game (located in the bottom Left corner) -> Activate a Product on Steam. There type in your CD Key and the game will be activated and added to your Steam account game library.
Standard Edition