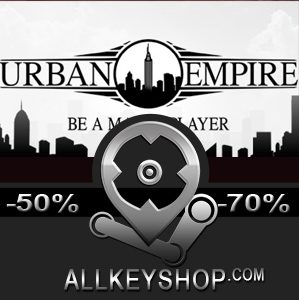 What is Urban Empire CD key?

It's a digital key that allows you to download Urban Empire directly to PC from the official Platforms.

How can I find the best prices for Urban Empire CD keys?

Allkeyshop.com compares the cheapest prices of Urban Empire on the digital downloads market to find the best sales and discount codes on trusted stores.

Build and rule a city in Urban Empire. Take on the role of a mayor of the city with a great family background. There are 4 ruling family dynasties and 5 characters each to choose from.

The game is more on the ruling side rather than building it. Political management plays a big role in the game. You must plan ahead and prove yourself from the opposition and think to the future by leading your city through technological advances.

While looking to the future of your city, you must also fulfill your duties to the citizens. You must think of their safety, happiness as well as public services. Use your convincing powers in order to get the city council to agree to your plans. New ideas and technologies will give your city an edge that no other city has.

Keep your guard up and your wits sharp as there will be more than 800 dynamic events that will test your decisions. Make the right choices to ensure a stable and successful city.

Zoom 1m 3m 1y All
Track product
GOG.COM CD KEY : You need to register on Gog.com, then use the GOG Key to download and activate your game to play Urban Empire.
EU STEAM CD KEY: Requires an EUROPEAN IP address or you must activate it with a VPN (Virtual Private Network) in order to play Urban Empire. Might have languages restrictions or language packs. Read the description on the store game page to know if the EU IP is only needed for activation or for playing also (maybe on EU Servers). Most of the stores offer you their help, or show you how to do this with a tutorial to follow.
STEAM CD KEY : Use the Steam Key Code on Steam Platform to download and play Urban Empire. You must login to your Steam Account or create one for free. Download the (Steam Client HERE). Then once you login, click Add a Game (located in the bottom Left corner) -> Activate a Product on Steam. There type in your CD Key and the game will be activated and added to your Steam account game library.
STEAM KEY ROW : It means for Rest Of the World countries which are not concerned by the region restrictions. This product can't be purchased and activated in Several countries. Please read the store description to know the full list of countries which are concerned. Use the key to Download and play Urban Empire on Steam.
Standard Edition
Compare Choose & Buy Download (803)

Instant gaming currently has the lowest price and this game

In my opinion, Instang Gaming is the store with the cheapest price for this game 😉