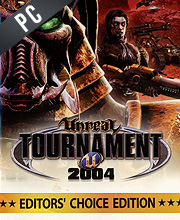 It's a digital key that allows you to download Unreal Tournament 2004 Editor's Choice directly to PC from the official Platforms.

How can I find the best prices for Unreal Tournament 2004 Editor's Choice CD keys?

Allkeyshop.com compares the cheapest prices of Unreal Tournament 2004 Editor's Choice on the digital downloads market to find the best sales and discount codes on trusted stores.

There are ten game modes which are both team-based and “every man for himself”. You, the player, take on the role of the ultimate techno-gladiator of the future. Take your fate into your own hands and battle against thirty-two other players online in different arenas. Take team fight to the next level in Onslaught Mode, and battle to protect and destroy fortified bases in the Assault Mode.

There are ninety-five maps available plus forty-five brand new maps for every existing game mode. Ride out and Rev-up in a range of land, air, and space-based vehicles that play critical role in an effective combat in Assault and Onslaught.

Thirty-two new characters on four new teams are introduced in UT2004: The human Thunder Crash with Malcolm as the lead; Robotic Corrupt lead by Xan Kriegor; a team of merciless Skaarj called the Iron Skull; and the reckless human mercenaries and pirates, the Helions.

The entire smorgasbord of frag-dealing arsenal from Unreal Tournament 2003 comes back for the experienced player to wield masterfully against new challengers. Unreal Tournament not only brings a new content for the hardcore fanatics, it also has new technology updates over its predecessors. This will surely deliver a slicker, faster and deeper experience than ever before!