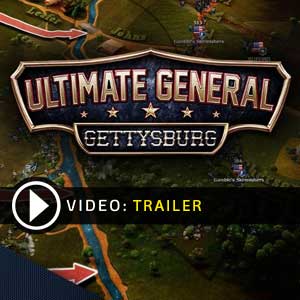 It's a digital key that allows you to download Ultimate General Gettysburg directly to PC from the official Platforms.

How can I find the best prices for Ultimate General Gettysburg CD keys?

Allkeyshop.com compares the cheapest prices of Ultimate General Gettysburg on the digital downloads market to find the best sales and discount codes on trusted stores.

Ultimate General Gettysburg is a tactical battle simulator game developed by Game-Labs and designed by Nick Thomadis who is known for his successful and popular “DarthMod” series.

The game allows you to lead thousands of soldiers in the famous battle of Gettysburg as commander of either Union or Confederate army. It is essentially Sid Meier’s Gettysburg in 3D. Ultimate General follows the same dynamic campaign and uses an almost identical system. The main difference, besides graphics, is that your units can only be controlled down to the brigade level instead of individual squads as they were in SM Gettysburg.

The game features the most precisely made map, state-of-the-art control system and smart AI, Multi-day dynamic battle, historically accurate forces and leaders, easy controls & unit self-awareness, advanced line of sight, numerous tactical factors, custom battles and evolving multiplayer experience. It offers eighteen maps for one on one matches and it is continuously being improved.

You have the liberty to use diverse tactics as the game develops. Your choices and military performance play a vital part in the end. Lead your army and win the Battle of Gettysburg!

GOG.COM CD KEY : You need to register on Gog.com, then use the GOG Key to download and activate your game to play Ultimate General Gettysburg.
EUROPEAN STEAM GIFT : It’s a steam gift for Europe which requires an European IP address to activate and to play Ultimate General Gettysburg on Steam. Read carefully the store description about region and language restrictions.
STEAM GIFT : A Steam gift is a one-time transfer you receive. You activate and install Ultimate General Gettysburg to play on Steam, it is a non-refundable game that stays in your Steam games collection. Please read the store description about any language or region restrictions.
STEAM CD KEY : Use the Steam Key Code on Steam Platform to download and play Ultimate General Gettysburg. You must login to your Steam Account or create one for free. Download the (Steam Client HERE). Then once you login, click Add a Game (located in the bottom Left corner) -> Activate a Product on Steam. There type in your CD Key and the game will be activated and added to your Steam account game library.
Bundle
Standard Edition