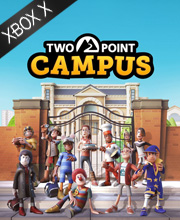 It's a digital key that allows you to download Two Point Campus directly to Xbox Series X from Xbox Live.

How can I find the best prices for Two Point Campus on Xbox Series X ?

Despite seeming similar to Two Point Hospital on the surface, Two Point Campus is stuffed with enough new ideas and irresistible charm to ensure it is a sequel well worth playing.

If you enjoyed Two Point Hospital on Xbox Game Pass, you’re going to love Two Point Campus as well. It’s a great sequel in a superb simulation series, and the college/university setting feels like the perfect next step for Two Point Studios’ brand of silly, strategic fun. It’s also one of the most enjoyable Xbox simulation games out there thanks to its well-designed control scheme, complete with a single-player campaign you’ll almost certainly get invested in.

But beyond its off-kilter humour and (admittedly understandable) fixation on cheese-based snacks, Two Point Games’s latest title is another successful case study in the exploration of classic simulators. It encapsulates everything that made Bullfrog Productions’ Theme series of the late nineties essential gaming, and continues to deliver that experience as a spiritual successor.

Two Point Campus Bonus Pack provides exclusive items which you can use to decorate the grounds of your fabulous University!

This includes the full game as well as the contents below