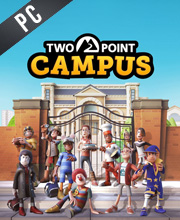 It's a digital key that allows you to download Two Point Campus directly to PC from the official Platforms.

How can I find the best prices for Two Point Campus CD keys?

Two Point Campus offers a rewarding and rich experience. It’s hard to find faults here without nitpicking negligible things like the odd repetition of a tannoy voice line, meaning that Two Point Campus really is the top of the class.

Two Point Campus is a school experience unlike any other. From weird and wonderful courses to quirky clubs, and student stereotypes you’ll find everything you want on a campus and so much more. As you flex your management muscles just make sure to keep your eyes open, these students all have their own style and personalities. Look after them well, and you’ll be rewarded with a lot of hidden puns, animations, and laughs along the way. Education has never been so much fun.

A Grade A return to a solidly high achieving franchise. Two Point Campus has plenty of silly SATS and delightful moments without upending the core of what makes the Two Point experience so easy to enjoy.

Two Point Campus Bonus Pack provides exclusive items which you can use to decorate the grounds of your fabulous University!

EU STEAM CD KEY: Requires an EUROPEAN IP address or you must activate it with a VPN (Virtual Private Network) in order to play Two Point Campus. Might have languages restrictions or language packs. Read the description on the store game page to know if the EU IP is only needed for activation or for playing also (maybe on EU Servers). Most of the stores offer you their help, or show you how to do this with a tutorial to follow.
EUROPEAN STEAM GIFT : It’s a steam gift for Europe which requires an European IP address to activate and to play Two Point Campus on Steam. Read carefully the store description about region and language restrictions.
STEAM GIFT : A Steam gift is a one-time transfer you receive. You activate and install Two Point Campus to play on Steam, it is a non-refundable game that stays in your Steam games collection. Please read the store description about any language or region restrictions.
STEAM CD KEY : Use the Steam Key Code on Steam Platform to download and play Two Point Campus. You must login to your Steam Account or create one for free. Download the (Steam Client HERE). Then once you login, click Add a Game (located in the bottom Left corner) -> Activate a Product on Steam. There type in your CD Key and the game will be activated and added to your Steam account game library.
STEAM KEY ROW : It means for Rest Of the World countries which are not concerned by the region restrictions. This product can't be purchased and activated in Several countries. Please read the store description to know the full list of countries which are concerned. Use the key to Download and play Two Point Campus on Steam.
United Kingdom PC Win 10 / Xbox Key. Digital code for United Kingdom which allows you to play on both Xbox and Windows 10 PC in United Kingdom. See below for more informations.
Standard Edition
Compare Choose & Buy Download (723)

Looks pretty fun, I definitely woulda liked this when I was in school. McCainiac#5438

Not usually a fan of simulator games but this actually looks pretty good. Rein#4650

I like the genre, so it could be interesting, but I still need to play a lot of games… 🙁

Wow didnt know the game but for what i had seen i really like it. Bambita#5094