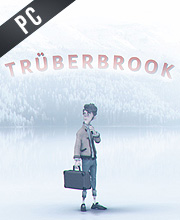 What is Truberbrook A Nerd Saves the World CD key?

It's a digital key that allows you to download Truberbrook A Nerd Saves the World directly to PC from the official Platforms.

How can I find the best prices for Truberbrook A Nerd Saves the World CD keys?

Allkeyshop.com compares the cheapest prices of Truberbrook A Nerd Saves the World on the digital downloads market to find the best sales and discount codes on trusted stores.

Truberbrook A Nerd Saves The World is an adventure video game that is developed by btf and published by Headup.

It is the year 1967 and the world is locked in turmoil as it is unaware of the events that are brewing in a little German province. You will get to play as an American student named Hans Tannhauser. By chance, he wins a trip to Truberbrook, a small and quiet German village. This catches him by surprise as he doesn’t remember joining any contest. Nonetheless, he still takes the trip to take a vacation from his Ph.D. in quantum physics.

He gets to meet a lot of quirky characters, each one more peculiar than the last, except for Greta Lemke, a young anthropologist who is in the arena for a research trip.

One day a mysterious stranger breaks into Tannhauser’s room in the GuestHouse Waldeslust and the only thing that went missing is his research paper on physics. He then eventually learns that his presence in the area is not an accident and that his purpose there is to save the world.

Truberbrook is a story-driven adventure game that has a lot of puzzles to solve as you progress with the story. The game’s art style is totally different and beautiful and completely hand-made.

Truberbrook A Nerd Saves The World is one narrative, puzzle game that you will surely enjoy.

Be the first one to write a review about Truberbrook A Nerd Saves the World !

Truberbrook A Nerd Saves the World is great game, you can buy it now with good price.

thats nice liked these point and click adventure games, was really sad to see telltale games go under, they were really having a genre renaissance.

Waooo why no one never speak about games like this! It’s Awesome! Its seems a mix between stop motion and 3D, i love the idea of use real maquette that make the game look like a diorama, thanks AKS to let me know about it,

Seems good to watch, great Design. I am not a fan of poitn&click games but i can keep an eye on this one… HF