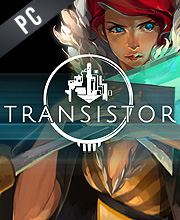 What is Transistor CD key?

It's a digital key that allows you to download Transistor directly to PC from the official Platforms.

How can I find the best prices for Transistor CD keys?

Allkeyshop.com compares the cheapest prices of Transistor on the digital downloads market to find the best sales and discount codes on trusted stores.

Transistor is a 2014 science fiction action role-playing video game developed and published by Supergiant Games which is available in all platforms.

Unlike other traditional role-playing games, Transistor introduces a new concept of skills to entertain players who are tired of playing typical RPGs. Skills and talents are tested as players are challenged to utilize limited resources to advance through the game.

With Transistor, opponents are much stronger and faster than the character but the hero uses a skill called Turn which enables players to freeze time and plot the hero’s upcoming movements and attacks, and carry them out in a rapid succession to perform combos.

The story takes place in a peaceful place call the Cloudbank until a robotic force call the Process attacks the place sealing the residents into the Transistor. The player casts as a singer named Red who woke up with a man stabbed by a greatsword call the Transistor.

Red’s voice is concealed in the Transistor together with the man’s identity and now in pursuit to recover her voice and uncover the identity of the man. Before succeeding in her goals, she needs to face the Process, commanded by the Camerata, first to advance.

EPIC GAMES KEY : Region Free / Worldwide. Requires Epic Games Launcher App in order to play the game. You need to create a free account here in order to download Transistor from Epic Plateform . Read the description on the store page about any language or country restrictions.
GOG.COM CD KEY : You need to register on Gog.com, then use the GOG Key to download and activate your game to play Transistor.
EUROPEAN STEAM GIFT : It’s a steam gift for Europe which requires an European IP address to activate and to play Transistor on Steam. Read carefully the store description about region and language restrictions.
STEAM GIFT : A Steam gift is a one-time transfer you receive. You activate and install Transistor to play on Steam, it is a non-refundable game that stays in your Steam games collection. Please read the store description about any language or region restrictions.
STEAM CD KEY : Use the Steam Key Code on Steam Platform to download and play Transistor. You must login to your Steam Account or create one for free. Download the (Steam Client HERE). Then once you login, click Add a Game (located in the bottom Left corner) -> Activate a Product on Steam. There type in your CD Key and the game will be activated and added to your Steam account game library.
Collection
Standard Edition