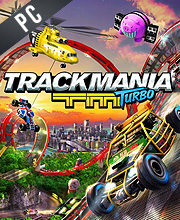 What is Trackmania Turbo CD key?

It's a digital key that allows you to download Trackmania Turbo directly to PC from the official Platforms.

How can I find the best prices for Trackmania Turbo CD keys?

Allkeyshop.com compares the cheapest prices of Trackmania Turbo on the digital downloads market to find the best sales and discount codes on trusted stores.

TrackMania Turbo is a racing video game in the TrackMania series developed by Nadeo and published by Ubisoft.

Trubo useing the principle of the predecessors: the races on tracks built by players where the final ranking is determined by the level of conduct, “time attack” mode, or in order of arrival in “rounds”. This game will propose four environments, which will be available in 200 circuits.

The innovations of this title certainly come together well on the sets (which will be very colorful) and a random generation of course and Double Driver mode, which offers a cooperative multiplayer mode. There will also be the “Campaign” mode in which we run in races created by Ubisoft. The mode “Arcade “ is a training mode that can be played alone or with others, and that will not affect the ranking of the player and mode ” Trackbuilder “creation mode circuits.

TrackMania Turbo also announced it will be compatible with Oculus Rift, for a successful immersion and high degree of adrenaline racing.

This is so funny, play with friends, and compete , to see who is the best in the track, all different map and circuit

Very good game! I really like the graphics and the sounds of this game!

I recommend to buy a key for Trackmania Turbo from cdkeys.com because i got the key fast and safe and only for 25 Euro.