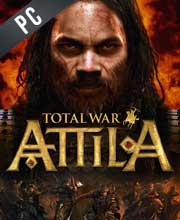 It's a digital key that allows you to download Total War Attila directly to PC from the official Platforms.

How can I find the best prices for Total War Attila CD keys?

Allkeyshop.com compares the cheapest prices of Total War Attila on the digital downloads market to find the best sales and discount codes on trusted stores.

Attila Total War is a game of military strategy published by The Creative Assembly and developed by Sega. Released a year after its predecessor Total War: Rome 2.

Here you have the opportunity to live the barbarian invasions of Rome as the Huns who crush all resistance in its path or as the Romans trying to defend their city. We find 10 new factions: the Franks, Saxons, Ostrogoths, Visigoths, Alans, Vandals, and Roman empires of the east and west, the Sassanid Empire and the Huns recess.

You will have different characteristics of every people and we will have to adapt (eg the Romans have a large territory but are attacked from all sides by the barbarians).

The various interactions between the different factions is intriguing because it allows players act on the geopolitics of the world (weddings, assassinations …) Besieged cities now have the opportunity to bring additional defenses, pikes, street barricades … which redistributes some advantages and disadvantages! With ever more realistic graphics.

Be the first one to write a review about Total War Attila !

It is a very good strategic game. I have on it 70 – 80 hours but i cant get the right mood to play it again.

Not the best Total War product. It feels more a survival than a strategy game.

Atilla is the besttt!!! in the history and in the game of course ;P

I would pick Kinguin to buy this fantastic game, looks really great in everything =D

I wonder how it differs from Shogun 2 in terms of layout and campaign structure.