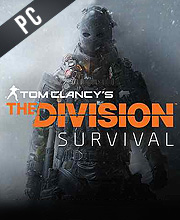 What is Tom Clancy's The Division Survival CD key?

It's a digital key that allows you to download Tom Clancy's The Division Survival directly to PC from the official Platforms.

How can I find the best prices for Tom Clancy's The Division Survival CD keys?

Allkeyshop.com compares the cheapest prices of Tom Clancy's The Division Survival on the digital downloads market to find the best sales and discount codes on trusted stores.

The events of Survival is not far from the events of the main story of the game. This expansion is set in Manhattan in the middle of a very harsh winter. Everything is frozen and supplies are scarce. There is no food, no water, and everything is frozen. Everyone is forced to survive even through aggressive means.

You will play as an SHD agent who by some miracle survives from a devastating helicopter crash. He too doesn’t have any supplies and must push his way to survival. The harsh winter blizzard is making this next to impossible. You won’t have to do this alone, though, help is not far away.

You, along with the others must investigate a rumored cure in the harsh weather as well as survive the hostile environment.

Was my first contact with any kind of a sort of Battle Royale Mode. But it’s great and very atmospheric.