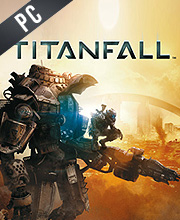 What is Titanfall CD key?

It's a digital key that allows you to download Titanfall directly to PC from the official Platforms.

How can I find the best prices for Titanfall CD keys?

Allkeyshop.com compares the cheapest prices of Titanfall on the digital downloads market to find the best sales and discount codes on trusted stores.

From the co-creators of Call of Duty and key developers of the Call of Duty franchise (Respawn Entertainment) comes the most anticipated multiplayer first person shooter game of 2014, Titanfall, also published by Electronic Arts (EA).

In Titanfall, you will play in a team of “pilots” where you will control your own mech called a “Titan” and battle it out on six-on-six multiplayer matches set in war-torn colonies in outer space. The game starts with players choosing their pilot types and pilots being “dropped” on the map. The Titans can then be deployed periodically basing on an on-screen timer which needs to complete its countdown to zero before a Titan can be summoned.

Titans and pilots are divided into classes, each with its own unique roles, primary weapons, and armors. For Titans, you get to choose between the Atlas Class (frontliner) the Ogre Class (tank), or the Stryder Class (speed and agility). For Pilots, there classes are Assassin, CQB, and Rifleman.

The game also features 15 multiplayer maps as well as five multiplayer game modes in the base game. Whether you are into the traditional team deathmatch game mode, or otherwise, Titanfall has got it for you.

Last Titan Standing – Eliminate ALL the enemy’s Titans or Pilots in five rounds in order for your team to emerge as winners.

Hardpoint Domination – Capture and hold three “hardpoints” (system nodes) and earn points for your team. At least 2 hardpoints must be captured and held for your team to win.

Capture the Flag – Steal your enemy’s flag and return it to your base and stop them from grabbing yours. Be the team with the most number of captures before time runs out and emerge as winners.

Pilot Hunter – Kill enemy Pilots and reach the score limit to win the game. One point is awarded fro every Pilot you kill.

This game is ok, for this price is good. Thanks AllKeyShop

Love this game.Collecting very point and cent fo it.

A very fun game, especially multiplayer with your friends is great!