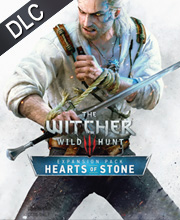 What is The Witcher 3 Wild Hunt Hearts of Stone CD key?

It's a digital key that allows you to download The Witcher 3 Wild Hunt Hearts of Stone directly to PC from the official Platforms.

How can I find the best prices for The Witcher 3 Wild Hunt Hearts of Stone CD keys?

Allkeyshop.com compares the cheapest prices of The Witcher 3 Wild Hunt Hearts of Stone on the digital downloads market to find the best sales and discount codes on trusted stores.

This is the first expansion pack for the wildly successful game The Witcher 3: Wild Hunt and allows the player and additional 10 hours of game play with new choices available to the player.

Playing as Geralt of Rivia you will introduced to new and more powerful monsters and new story lines which introduce new characters which will shape the storyline based off of you choices.

In this game you will be hired to defeat Olgierd von Everec, an immortal bandit captain, and must battle new monsters with a variety of newly available weapons and enchanted artifacts at your disposal.

New map locations and towns are wonderfully done and give the impression of playing the original game. The development team has done a flawless job of merging this expansion with original game environment.

Players will truly appreciate the skill with which this has been done as it gives more of an impression of a missed chapter of the original game and deepens the overall feel of the game without feeling like a desperate addition for the sake of profit.

Everything about this expansion was well thought out and executed leaving us excited about this chance to delve back into this world and anticipate any future expansions that may come.

Great dlc definitly worth your money is exiting till the end and even give you chills sometimes and got the best boss fight in the game. In my opinion its better than blood and wine buy it if you havent your not regretting it

Well the core game is game of the year material, so this DLC is sure worth the buy!

looks like a nice DLC with alot of new features…. worth checking out