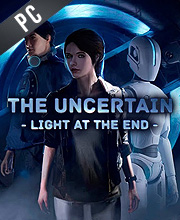 What is The Uncertain Light At The End CD key?

It's a digital key that allows you to download The Uncertain Light At The End directly to PC from the official Platforms.

How can I find the best prices for The Uncertain Light At The End CD keys?

Allkeyshop.com compares the cheapest prices of The Uncertain Light At The End on the digital downloads market to find the best sales and discount codes on trusted stores.

The Uncertain: Light At The End is an adventure video game that is developed by ComonGames and published by Meta Publishing.

Set in a future post-apocalyptic earth where the very robots who used to serve the humans have turned against them. Now they hunt the humans and hold them captive. You will play as one of the human survivors, a girl named Emily.

You are the outcast in this world that is ruled by robots. You must evade them and survive. A small ray of light has shined upon you as an inventor robot called RT and a small group of like-minded robots have decided to help the few surviving humans.

With the help of RT, you will try to find out what is the real reason for the disappearance of the humans as well as what has happened to the AI.

Offering a third-person sci-fi adventure that is set in the world of robots. Get to know about the past and present world by interacting with it. There are a lot of unique puzzles to solve and decisions that will stir the course of the game’s story.

Enjoy the beautiful locations as well as the mood-setting music.