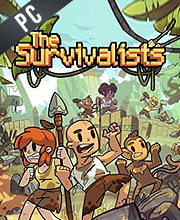 What is The Survivalists CD key?

It's a digital key that allows you to download The Survivalists directly to PC from the official Platforms.

How can I find the best prices for The Survivalists CD keys?

Allkeyshop.com compares the cheapest prices of The Survivalists on the digital downloads market to find the best sales and discount codes on trusted stores.

Set in the universe of the Escapists, the Survivalists is an adventure, survival sandbox where players can explore, craft, build and train monkeys.

Interesting and charming in its own way, The Survivalists will keep you entertained in short bursts as you try to complete the main objective and craft items to stay alive. Unfortunately, the AI system of your monkey companions is quite cumbersome and clunky. You’ll often find yourself more annoyed than delighted due to all the monkeying around.

In an industry that has shifted from being “kid-friendly” to “adult-focused,” it’s imperative to remember that some games simply won’t work for the more aged gamers (30 is aged, right?). That’s not to say The Survivalists won’t resonate with adults — if this is your cup of banana smoothie, by all means — but it seems to be trying to speak with a younger audience. If you’re lamenting that school has started and you can’t devote as many hours to Minecraft with friends as you’d like, you’re probably going to love The Survivalists.

The deluxe edition includes the base game, the monkey business dlc, original soundtrack and an artbook.

Zoom 1m 3m 1y All
Track product
EU STEAM CD KEY: Requires an EUROPEAN IP address or you must activate it with a VPN (Virtual Private Network) in order to play The Survivalists. Might have languages restrictions or language packs. Read the description on the store game page to know if the EU IP is only needed for activation or for playing also (maybe on EU Servers). Most of the stores offer you their help, or show you how to do this with a tutorial to follow.
STEAM GIFT : A Steam gift is a one-time transfer you receive. You activate and install The Survivalists to play on Steam, it is a non-refundable game that stays in your Steam games collection. Please read the store description about any language or region restrictions.
STEAM CD KEY : Use the Steam Key Code on Steam Platform to download and play The Survivalists. You must login to your Steam Account or create one for free. Download the (Steam Client HERE). Then once you login, click Add a Game (located in the bottom Left corner) -> Activate a Product on Steam. There type in your CD Key and the game will be activated and added to your Steam account game library.
STEAM KEY ROW : It means for Rest Of the World countries which are not concerned by the region restrictions. This product can't be purchased and activated in Several countries. Please read the store description to know the full list of countries which are concerned. Use the key to Download and play The Survivalists on Steam.
Deluxe Edition
Standard Edition
Compare Choose & Buy Download (743)