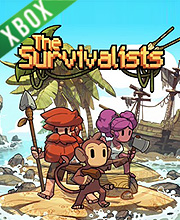 What is The Survivalists Game Code?

It's a digital key that allows you to download The Survivalists directly to Xbox One from Xbox Live.

How can I find the best prices for The Survivalists on Xbox one?

Allkeyshop.com compares the cheapest prices of The Survivalists on the digital downloads market to find the best sales and discount codes on trusted stores.

Set in the universe of the Escapists, the Survivalists is an adventure, survival sandbox where players can explore, craft, build and train monkeys.

The Survivalists on Xbox One is a very enjoyable experience. Its gameplay feels a bit like Don’t Starve, and its monkey system a bit like Factorio. But above all else, its charm and general aesthetic is all its own.

I came into The Survivalists with high hopes, being such a fan of The Escapists. Sadly I came away from my time with it underwhelmed. There’s certainly fun to be had, and the feel of Escapists is here is parts, but some of the elements, such as the lack of storage space when out exploring, kept bringing my experience further down the longer I played. Here’s hoping Team 17 can bring me back in with the eventual (please) Escapists 3.

The deluxe edition includes the base game, the monkey business dlc, original soundtrack and an artbook.