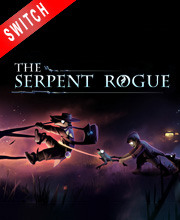 What is The Serpent Rogue Game Code?

It's a digital key that allows you to download The Serpent Rogue directly to Nintendo Switch directly from Nintendo eShop.

How can I find the best prices for The Serpent Rogue on Nintendo Switch ?

Allkeyshop.com compares the cheapest prices of The Serpent Rogue on the digital downloads market to find the best sales and discount codes on trusted stores.

The Serpent Rogue is an action-adventure game with a botanical twist developed by Sengi Games, explores a medieval fantasy world, and masters the art of alchemy and taming wild creatures. Step into the shoes of a mysterious alchemist known only as the Warden as he tries to protect the world from the dreadful Serpent Rogue by crafting, boiling, and concocting potions, it has laid down roots on Mount Morbus its evil is spreading quickly threatening to devour the entire realm. Explore every inch of the map, unearth secret passages and expand your knowledge in order to stop the incoming disaster and restore peace and tranquility to the land.

The Serpent Rogue is a game that has a lot going on, which unfortunately has led to most of the game’s features feeling rushed and not fully executed. Keeping it simple would have been a good mantra for The Serpent Rogue to live by, but it instead tries to implement too many things with not enough finesse. The game certainly has interesting researching and crafting elements, with some other unique ideas too. However, it falls short with clunky mechanics and a lack of polish.

Zoom 1m 3m 1y All
Track product
NINTENDO CODE : This is a digital code for The Serpent Rogue. Use the download code on the Nintendo eShop of your Console. Once connected to the Nintendo eShop, you can enter and redeem the Download Code. Read carefully the store description about any language and region restrictions.
Standard Edition
Compare Choose & Buy Download (803)