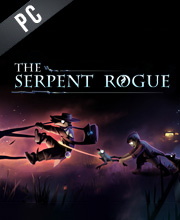 What is The Serpent Rogue CD key?

It's a digital key that allows you to download The Serpent Rogue directly to PC from the official Platforms.

How can I find the best prices for The Serpent Rogue CD keys?

Allkeyshop.com compares the cheapest prices of The Serpent Rogue on the digital downloads market to find the best sales and discount codes on trusted stores.

The Serpent Rogue is an action-adventure game with a botanical twist developed by Sengi Games, explores a medieval fantasy world, and masters the art of alchemy and taming wild creatures. Step into the shoes of a mysterious alchemist known only as the Warden as he tries to protect the world from the dreadful Serpent Rogue by crafting, boiling, and concocting potions, it has laid down roots on Mount Morbus its evil is spreading quickly threatening to devour the entire realm. Explore every inch of the map, unearth secret passages and expand your knowledge in order to stop the incoming disaster and restore peace and tranquility to the land.

Despite the early confusion, The Serpent Rogue is a great pick for fans of craft-intensive games like Valheim. The focus on exploration will appeal to open-world RPG gamers, as well as those who like strong stories with dark or spooky themes.

Despite the early confusion, The Serpent Rogue is a great pick for fans of craft-intensive games like Valheim. The focus on exploration will appeal to open-world RPG gamers, as well as those who like strong stories with dark or spooky themes.

Zoom 1m 3m 1y All
Track product
EU STEAM CD KEY: Requires an EUROPEAN IP address or you must activate it with a VPN (Virtual Private Network) in order to play The Serpent Rogue. Might have languages restrictions or language packs. Read the description on the store game page to know if the EU IP is only needed for activation or for playing also (maybe on EU Servers). Most of the stores offer you their help, or show you how to do this with a tutorial to follow.
EUROPEAN STEAM GIFT : It’s a steam gift for Europe which requires an European IP address to activate and to play The Serpent Rogue on Steam. Read carefully the store description about region and language restrictions.
STEAM GIFT : A Steam gift is a one-time transfer you receive. You activate and install The Serpent Rogue to play on Steam, it is a non-refundable game that stays in your Steam games collection. Please read the store description about any language or region restrictions.
STEAM CD KEY : Use the Steam Key Code on Steam Platform to download and play The Serpent Rogue. You must login to your Steam Account or create one for free. Download the (Steam Client HERE). Then once you login, click Add a Game (located in the bottom Left corner) -> Activate a Product on Steam. There type in your CD Key and the game will be activated and added to your Steam account game library.
Standard Edition
Compare Choose & Buy Download (803)